Let the Hate Flow Through: Packers Must Turn to Dark Side 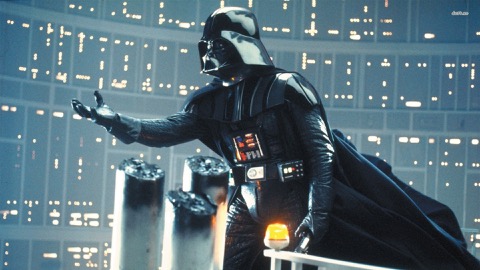 With the Seattle Seahawks travelling to Green Bay for the Packers’ season opener at Lambeau Field, there has been less-than-expected talk of the tragic collapse in the waning minutes of last year’s NFC Championship game. In hopes of quelling such distractions, coach Mike McCarthy has been quite explicit that the team will not resort to emotions or a quest for vengeance to fuel any competitive advantage.

The question arises, however, if that is wise and whether such comments are in line with how legions of diehard Packers fans feel. Indeed, it is somewhat troubling that McCarthy, Aaron Rodgers and others talk about how last season’s collapse is in the past and that the team refuses to be too emotional about this while at the same time appealing to the emotion and passion of fans at Lambeau Field in the Packers’ somewhat half-hearted “Get Loud” campaign.

Left to stew and agonize over last year’s collapse during the long offseason, my lasting impression is that the Packers will ether use this setback as the catalyst to finally win a second Super Bowl under the Rodgers/McCarthy regime some five years after our triumph in Dallas for Super Bowl XLV or the Packers will continue to wane and falter, squandering another once-in-a-lifetime quarterback with only one title. After all, sports history is replete with many examples of teams falling from grace in rather spectacular fashion after notable debacles like the one witnessed in Seattle last year.

In the aftermath of the greatest playoff collapse in NFL history — superseded perhaps only by the Yankees choking a three-game lead to the then cursed Red Sox in 2004 — the Houston Oilers ceased to exist entirely soon after imploding during a 32-point Buffalo Bills comeback back in 1993. The Buffalo Bills themselves declined greatly after the Music City Miracle, not having made the playoffs since. And while the Oakland Raiders made it to the Super Bowl the year after, getting blown out by the Tampa Bay Buccaneers, they fielded a better team in the year of the Tuck Rule game — the true turning point toward their decade plus of misfortune — and have been plagued by bad juju ever since. Those are just a few examples of many.

The Packers, of course, are not the hapless Bills, defunct Oilers, or even the once-proud Raiders, as they should prove to be more resilient with the best quarterback in the league, a very good if not elite coach and staff, and a reasonably well balanced roster on both sides of the ball. These considerations are further bolstered by a longstanding tradition and history that no other team has, as we approach our centennial jubilee in just a few short years.

Still, particularly with these lingering question marks on the defensive side of the ball at inside linebacker and cornerback, with concerns further exacerbated by the sudden loss of Jordy Nelson and the limited play of Randall Cobb with a nagging shoulder injury, Packers fans should question why Mike McCarthy and players are not openly espousing the use of emotion and painful memories of last year’s NFC title game as the impetus behind this year’s bid for another, albeit belated Super Bowl championship.

To phrase the matter another way, this author advocates that the Packers coaching staff, players, and fans alike untap “negative” emotions like anger, contempt and even hatred not just in this game, but in every game going forward. In Star Wars parlance, the Packers should turn to the Dark Side of the Force. Of course, Emperor Palpatine is a mere caricature of evil, and a rather silly one at that, but some of his quotes on the constructive faculties of anger and hatred ring unquestionably true:

You want this [light sabre], don’t you? The hate is swelling in you now. Take your Jedi weapon. Use it. I am unarmed. Strike me down with it. Give in to your anger. With each passing moment you make yourself more my servant.

[to Luke while dominating Lord Vader in a light sabre duel] Good! Use your aggressive feelings, boy. Let the hate flow through you!

The movie attempts to refute the Sith creed embracing aggressive feelings as empowerment, but it is nonetheless the case that Skywalker was only able to defeat Darth Vader by tapping in to his anger and hatred.  Thus, the narrative inadvertently confirms the Power of the Dark Side of the Force, at least when counterbalanced with what we associate with the good, when one, as Friedrich Nietzsche describes it, transcends beyond good and evil.

In the less than laudable Revenge of the Sith, the Emperor had another quote that is quite instructive:

“I know you would [like to kill me]. I can feel your anger. It gives you focus… makes you stronger.”

Perhaps the quote from Lord Vader in The Empire Strikes Back the during confrontation with Luke in the Cloud city is most persuasive of all:

”Impressive. Most impressive. Obi-Wan has taught you well. You have controlled your fear. Now, release your anger. Only your hatred can destroy me.”

Of course, iconoclastic heathens such as yours truly, persuaded by Nietzschean philosophy that eschews simplistic, bourgeois notions of right and wrong, reject such simplistic dichotomies between good and evil, between Jedi and Sith, as we seek to transcend beyond good and evil and use both to improve ourselves and our lives. That anger and hatred does give one focus, makes one stronger should be indisputable, and that is precisely why the Packers players and coaching staff — but also by extension we fans — should tap into these dark powers.

Outside of dubious, geeky Stars Wars references, one sees this very phenomenon in sports. Aside from aggressive music like heavy metal, industrial or rap music being more conducive to rigourous workouts in the gym, an instructive example that Jim Harbaugh used perhaps a few times too often concerned Muhammad Ali and how he chose to use the indignity of being excluded from a segregated hotel that was hosting an upcoming fight:

The hotel that staged the fight was segregated, and even though Ali trained there he wasn’t allowed to stay there. Instead he had to lodge at a hotel five miles away. Again, Ali refused to take the easier route and would run the five miles before his training sessions. Said Harbaugh: “Every step of that run, he would tell himself, ‘Somebody’s going to pay for this.’ And that was going to be Sonny Liston.

So should Mike McCarthy take this page from Harbaugh’s playbook? On one hand, McCarthy is still in the league, coaching a team many still favor to win it all this year even without Jordy Nelson. One cannot say the same of his counterpart, although Harbaugh turned the 49ers around very quickly and enjoyed greater success during the same, shorter period of time.

It is also the case that, as a regular season game, the Packers cannot truly get revenge this time around, but rather can only win to succor partial revenge and — by claiming the crucial head-to-head tiebreaker — set the stage for probable revenge by forcing any postseason rematch at Lambeau Field: a post-season rematch in which the Packers are veritably certain to prevail. By the same token, with all the attention surrounding last year’s debacle in pregame chit-chat, perhaps the less said publicly the better. Ideally, perhaps it is best the Packers players and staff feel this way, but just do not allow themselves to run off at the mouth about it, all the while secretly putting up pictures of Lance Easley or obnoxious Seahawks fans in the locker room to harness that precious anger and hatred that is to be released on game day.

On the other hand, our own Super Bowl run demonstrates the power of anger, aggression, and a desire for revenge. In 2010, both the players and staff yearned to beat Brett Favre and the Minnesota Vikings. That anger, that grudge, kept a chip on their collective shoulders that served them well: for anger makes you stronger, gives you focus. And towards the end of that run with the return of Aaron Rodgers in a de facto playoff game against the Giants on December 26 the emotion and energy emanated from their very being from that point on until their Super Bowl victory in Dallas. This, of course, was preceded by McCarthy’s infamous press conference after a last-minute loss at New England whereby he declared:

“I don’t care what you guys think. Okay? We came here to win. We are nobody’s underdog.”

Still not convinced by the constructive powers of anger, hatred, and rage? Just consider this — had they used these dark powers more in the NFC title game, if the players truly wanted revenge, it would simply be inconceivable that Morgan Burnett would have kneeled down after that interception.

Rather, he would have done his best to return it for a score if nothing else than to humiliate and denigrate Seahawks players, staff and fans, and thereby truly end the game.

Anger, hatred, and outright contempt alone can give birth to such malevolent desires to watch others cry, to want to not just defeat the opponent, but to rip the hearts out of opposing teams’ players, staff, and fans and, knowing that Seattle has by far the highest suicide rate in the nation, that your actions may just make that suicide rate go up!

It is that sort of dark energy that the Packers should play with not just against the Seahawks, but everyone they face. Make everyone pay not just for what happened last year, but Lance Easley and the Fail Mary game, and all the frustrating setbacks which have held us back since hoisting the Lombardi Trophy almost five years ago.

Get angry, learn to hate, and tap into those aggressive feelings which give one strength and focus. And thereby, make everyone pay for our past disappointments and pay dearly. Without harnessing these dark powers, without using aggressive feelings, I do fear our beloved Packers will fail to fulfill their destiny — a premonition too horrible to contemplate. And this is why turning to anger and hatred is not just desirable, but wholly necessary. Our birthright and destiny lie in the balance.

Previous Article
Would the Packers Consider Re-Signing Desmond Bishop?
Next Article
Matthews: Even With Win, Not All is Forgotten