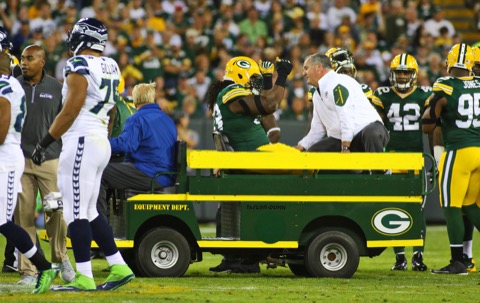 The ankle injury that defensive lineman Josh Boyd suffered against the Seattle Seahawks will be of the season-ending variety.

Boyd has a broken ankle and possible ligament damage. He’ll be placed on injured reserve, which will end his season.

With the roster spot, the Green Bay Packers will reportedly bring back inside linebacker Joe Thomas.

We had Thomas making the Packers’ final roster out of training camp, but he didn’t and wasn’t signed to the practice squad either. Instead, Thomas signed with the Dallas Cowboys’ practice squad.

Interestingly, the Packers put another inside linebacker they cut — Carl Bradford — on their practice squad. Why they aren’t elevating him to the active roster instead of signing Thomas is a mystery to us.

It’s possible the Packers actually thought more of Thomas than Bradford, but that Thomas wanted a fresh start somewhere else.

At any rate, the Packers were down to three healthy inside linebackers after putting Sam Barrington on injured reserve last week. They are Clay Matthews, Nate Palmer and rookie Jake Ryan.

Ryan hasn’t played much outside of special teams, which suggests the Packers don’t think he’s ready for prime time.

Thomas, on the other hand, has a good opportunity to come in and get some playing time.

The Packers used Matthews extensively in coverage on Sunday night. Ideally, he’d be rushing the passer in passing situations and that’s where Thomas comes in.

He’s better in coverage than either Palmer or Ryan.

Now, what of the defensive line depth now that Boyd is gone?

Letroy Guion will return from his suspension next week, so the Packers will get their numbers back up then.

Don’t expect Thomas to be released to make room for Guion, though. He’s guaranteed a minimum of three game checks since he was signed off another team’s practice squad.

Of course, we can just wait for next week’s season-ending injury to clear a roster spot for Letroy too.

Previous Article
Marshawn Lynch Would Like You to Back Up Off Him, Bro
Next Article
Eddie Lacy Injury is Minor