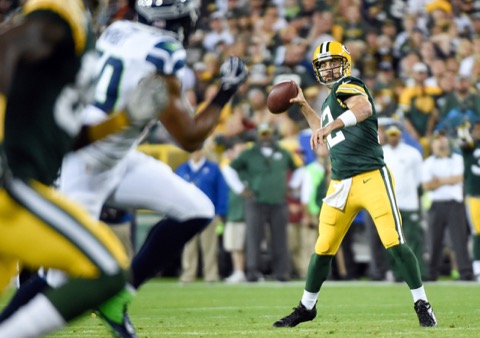 Monkey? Off the back.

At least for now.

The Green Bay Packers went slow and steady about it. Kind of like a lover that doesn’t quite know if you’re enjoying yourself or not, but hell. They got it done.

The Seattle Seahawks can go home and fuck themselves.

This wasn’t for the NFC Championship, but it was for pride and self respect. And it was for 2-0 and 0-2, which is what Seattle is sitting with.

And you know what?

This is substantial, if for nothing else besides the mental.

Great game by the much-maligned defense.

Dom Capers is still befuddled by the read-option, but beside that, the Packers defense showed us what we expected from the whole team.

They came out fired up.

They made up for their weakness — the run defense — by stuffing Marshawn Lynch for 41 yards on 15 carries.

If it weren’t for Russell Wilson running the read option, which Dom, Dom, Dom, Dom, Do-Doobie, Dom, Dom Dom, Dom, the Packers would totally have shut down the vaunted Seattle running game.

That’s good for us.

The Packers offense did enough, but we stopped during the middle of the game. When Aaron Rodgers and the gang was supposed to be turning the game into a blowout, they weren’t.

It was the fact that the Packers were losing and the offense wasn’t putting up points.

But they closed it out.

They did it without Eddie Lacy, who left with a sore ankle.

In came Jimmy Starks, who ran for 95 yards on 20 carries. And there was Randy Cobb, who caught eight for 116, despite whatever shoulder injury he had.

It was his scrambling that made the difference in this game, though.

Because you know that didn’t happen last time.

And so, I will say it again.