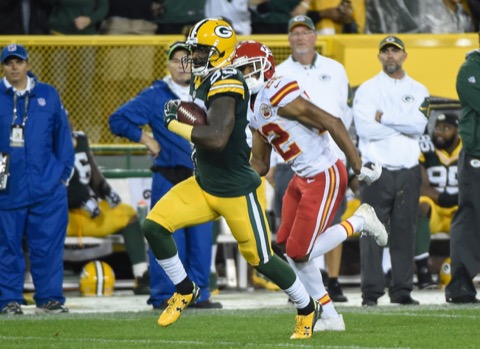 Yes, Kansas City had a desperate rally that made the final score look closer than the game ever really was, but who cares? We imagine the Packers were sitting around laughing like we were while that was happening, muttering “stupid Chiefs.”

Anyway, I’ll try not to rehash what Shawn touched on last night. I immediately went from watching the game to getting my face melted off by AC/DC at Dodgers Stadium. It was a good night, but my head is foggy and my ears are still ringing.

But let’s give this a shot.

Alright, Casey Hayward…
Yeah, I’ve called for this guy’s job and with good reason. He doesn’t look like he belongs in the starting lineup half the time. Meanwhile, you’ve got rookie Damarious Randall looking like he does belong in the starting lineup. I haven’t reviewed the tape and missed some of Jeremy Maclin’s late-game plays, but I will say Hayward did catch my eye by making a couple nice plays early on Monday night. In all, Hayward finished with five tackles, including one for loss and a pass defended. Randall still has more upside, but for an evening at least, Casey Hayward made some impact plays. At least we know he still has that capability.

We bet Clay Matthews is happy today
You know, Mr. Team First. Mr. I’ll Do Whatever They Ask Me To. Yes, Clay Matthews has been playing that part, but we all know better. Clay Matthews is all about Clay Matthews’ stats and the stats he wants are quarterback sacks. Well, you got two on Monday night, so congratulations. Matthews rushed the passer more on Monday than he probably has in the first two games combined. In week 2, Matthews was relegated largely to playing the run and dropping into coverage in passing situations. He rushed the QB only three times and didn’t play one snap at his beloved outside linebacker position. Well, as Shawn pointed out, the re-signing of Joe Thomas — the Packers’ best coverage linebacker — allowed Matthews to move outside on passing downs and rush. And that seems to be a pretty good combination. Thomas had four tackles, a sack and QB hit. Matthews had three tackles, two sacks and three QB hits. We’re still not sure why the Packers cut Thomas to begin with, but his return will obviously allow Matthews to be a glory boy again. Interesting that Thomas had more tackles than Matthews in a part-time role though.

The difference between Aaron Rodgers and Alex Smith is enormous
I mean, look, we kind of already knew that, but it just gets drilled home watching these two guys play against each other. They’ll always be compared because they were the top two quarterbacks in the 2005 NFL Draft. And guess what. You fucking lose, Alex Smith. My personal feeling about Smith has always been that he was good, but not anything near great. And you could certainly make that case. However, watching him first hand, especially against Rodgers and you feel like he’s just mediocre. A game manager at best. You probably noticed that Jeremy Maclin touchdown was the first the Chiefs, i.e. Smith, had thrown to a receiver since 2013. That’s fucking pathetic. A quarterback who’s worth any shits should at least accidentally throw a TD to a receiver at some point during a season. You also knew that once the Chiefs got down by double digits, they pretty much had zero chance of coming back. Smith just doesn’t have that ability. His stats on the night don’t look bad — 24-of-40 for 290, one TD and one interception — but compared to Rodgers, Smith is shit. Take a look at his QBR. It was a garbage 17.6. People can say whatever they want, but Smith is nothing more than a middle of the road quarterback. Might not lose you games, but won’t win them for you, either.

Good thing the Packers signed James Jones
I say that not only because Jones caught seven balls for 139 yards and a touchdown on Monday. I say that because the expected emergence of Davante Adams just isn’t happening. At least not yet. It wasn’t really Adams’ fault on Monday night that he didn’t contribute. He re-injured his ankle and barely played. The point is, he hasn’t made much of an impact thus far. Adams has just nine catches for 92 yards and no touchdowns. Jones has 12 for 219 and four.

More Jayrone!
Yeah, you saw our boy Jayrone Elliott out there. He appears to be getting more playing time after fucking up Seattle down the stretch last week. Elliott had four tackles, a sack and a QB hit. Elliott is still in a rotation with Neal, Perry, Peppers and Matthews at outside linebacker, but we’d say he’s already making a greater impact that the first two of those guys. Although Perry did have an uncharacteristically decent game on Monday with three tackles, two of which went for a loss, including a sack. Still, Elliott has probably already made more plays in two weeks than Perry or Neal have in their careers. So, let’s keep that train moving in this direction. More Jayrone!