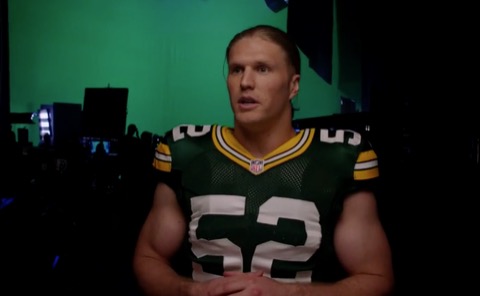 Personally, I think NBC’s Sunday Night Football intro is lame as shit. Carrie Underwood? Are you fucking kidding me?

I could scrape a piece of gum off the bottom of my shoe and put a mic in its hand and that would be a more exciting option.

Of course, I am a Bocephus kind of guy and as such, you can take your new country and jam it up your ass. I’ll take that outlaw shit.

At any rate, the producers of that joke love Green Bay Packers linebacker Clay Matthews.

This year will mark the fourth consecutive year that Matthews has appeared in the Sunday Night Football intro.

And Matthews knows why.

Because he lives close by.

Matthews makes his offseason home in the northern part of Los Angeles, which is also where this thing is produced.

This is an awful interview, where you can’t even hear the questions, but in it Matthews jokes about just that. What was that, Clay? A slight glimpse of personality!?!

Rodgers Wants Nothing to Do with Hall of Fame Game