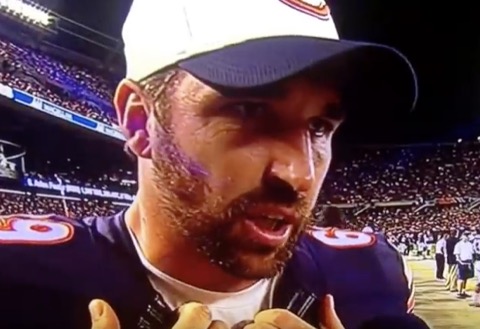 I mean, not that Jared Allen was anything but a shadow of his former self, but still. Their fans started giving up on Sunday when the Chicago Bears put up zero points in a loss at Seattle.

Yeah, that’s right. The Bears were trying to make Allen a linebacker because they switched from the 4-3 to the 3-4 this year. Allen hasn’t played linebacker once in the 11 years he’s spent in the NFL prior to this one, but who cares about that?

Allen had just 5.5 sacks last season and didn’t have any this year, although he did have an interception, his first since 2011, when he was a sheep-fucking Minnesota Viking.

Carolina, which actually plays a 4-3 and is in need of a pass-rushing defensive end, gets something like that. A guy who used to be really good at playing 4-3 defensive end.

Who knows, though. Maybe Allen still can wrangle a few sacks for the Panthers.

The Bears defense is no prize, something he openly admitted in the preseason, and he was trying to learn a new position 11 years in. It’s possible actually playing with some talent might allow Allen to turn back the clock slightly.

So sorry your train wreck of a season is over already, Chicago. Couldn’t even make it to October this year…