Bears Fans Get Arrested the Most

Does that even need any context?

Okay, we’ll give it some context.

Chicago Bears fans. That’s the answer to the question of who gets arrested most often at Lambeau Field.

Gannett, which owns most of the newspapers in Wisconsin, including the Green Bay Press-Gazette, broke down the numbers related to rowdy fan behavior at Lambeau Field since 2005. Not surprisingly, there are more arrests and ejections than usual when the Green Bay Packers NFC North foes are in town.

You know, because fans of the Chicago Bears and Minnesota Vikings are fucking dicks.

They should be arrested, ejected or punched in their stupid fucking faces just for stepping foot in the Lambeau Field parking lot.

But anyway, here’s the arrests chart. Go Bears! Bear Down! 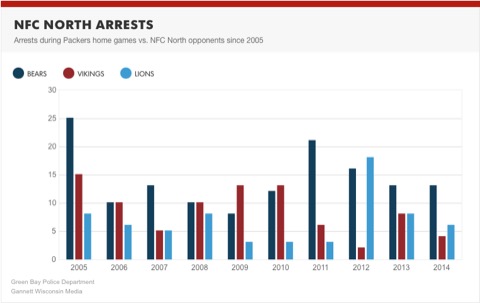 The Bears average 14 arrests per game over that period.

Ejections don’t land you in the Brown County jail, but they do get your ass thrown out of the game.

Again, Bears fans are strong here, but you know who is stronger? The gigantic pile of fecal matter known as Minnesota Vikings fans. Skol Vikings! 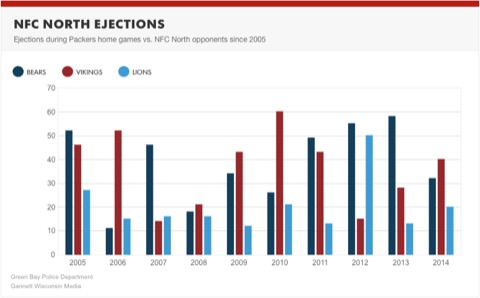 So there you go. Concrete proof of what a bunch of bags of shit Chicago Bears fans and Minnesota Vikings fans are.

Previous Article
Myles White Has a Job Again
Next Article
Get to Know the Enemy: Chicago Bears Preview