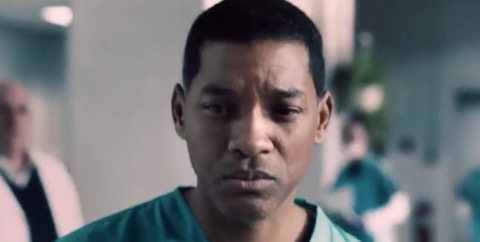 Sticking it to the man — one of our favorite pastimes. And that’s why we love this.

Will Smith — the Fresh Prince, not the Milwaukee Brewers pitcher — has a new movie coming out on Christmas called Concussion. In it, he sticks it to the NFL. Or more accurately, he plays Dr. Bennet Omalu, who stuck it to the NFL.

Omalu is the neuropathologist who discovered chronic traumatic encephalopathy (CTE) by studying the brain of former Pittsburgh Steelers center (and Badger great) Mike Webster. That led to the realization that football and the repeated head trauma that football players endure can lead to all kinds of problems, including dementia, depression and even suicide.

Well, as you can imagine, the NFL didn’t think much of those conclusion. And since the NFL is run by a bunch of scumbags who only care about money, they tried to discredit Omalu.

This was at the center of the concussion lawsuit filed by former players, which the league ultimately settled. At one time, the league actually took the position that concussions could have no long-term effects.

It’s also at the center of all of these new safety measures because, “Look everyone. We really do care about the safety of our players. Now please don’t sue us.”

Omalu’s ordeal was previously depicted in the documentary League of Denial, which we would highly recommend.

It really gives you a good idea of what kind of dirtbags run and profit from American’s favorite sport. It also shines a light on what a piece of shit commissioner Roger Goodell is, in case you weren’t already aware.

You have to think a Will Smith movie is going to bring these shenanigans to a much wider audience, though. Maybe it’s just me and maybe it’s taking a bit of dramatic license, but Concussion certainly seems to infer that the NFL was trying to kill Omalu at some point.

Let that be a lesson to you.

Don’t EVER cross The Ginger Hammer. That motherfucker just might put a bomb under your car.