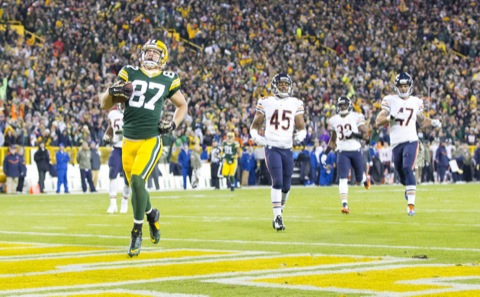 File this under the “Is it news if everyone already knows it?” tab.

If you are or were just watching the Preseason Week 2 game against the Steelers, then you probably saw the horror of watching Jordy Nelson make a 1st quarter catch only to immediately hit the deck with an injury. The fact that Nelson was untouched on the play only made it more likely that the condition was serious.

As just mentioned in the article of what to watch for in this game, even though there might be some storylines making preseason games close to watchable, the actual bottom line is that you want to get through these games without suffering any major injuries. As it turns out, the Packers failed in this regard in disastrous fashion.

Early reports have confirmed that Jordy Nelson tore his ACL on the above mentioned play. The Packers, of course, won’t announce anything until it is confirmed by an MRI. So, you can hang onto hope if you want, but I think the last time an injury of this magnitude turned out to be incorrectly reported involved Reggie White, an elbow, and God.

So, logic suggests the Packers WILL be playing the 2015 season without Jordy Nelson.

Nelson is certainly one of the most important players on the roster. However, he plays at a position where the Packers have a lot of depth and talent. This most likely puts Davante Adams into Nelson’s spot with Jeff Janis taking Adam’s spot. Randall Cobb, who becomes the Packers perceived #1 WR, will likely work the slot with Ty Montgomery backing him.

This might also encourage the move to more double tight end sets with Cobb and Adams as the lone receivers on the field. The double tight end set is primarily a running formation, and after this taking a blow of this magnitude to the passing offense, the Packers may choose to mitigate the damage by relying more heavily on the run.

Regardless, the expectations for the Packers don’t change one iota with this injury, only the difficulty of achievement does. If the Packers are going to get to the Super Bowl without Jordy Nelson, they are going to need contributions from other members of their offense, and they are going to have to play defense that is at least good enough for the top half of the league. If the Packers can manage to pick up the slack, they can still get where they want to go.

Previous Article
The 2015 Preseason: Packers versus Steelers- What to Watch For
Next Article
Packers Fall to Steelers, Lose More Than Game