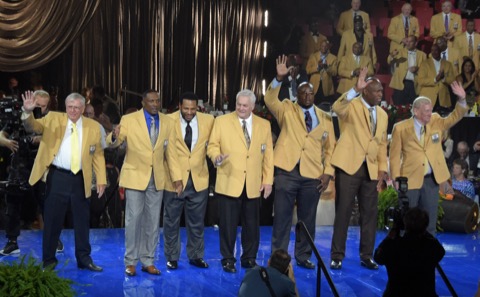 That’s the gold jacket that signifies that you’re a member of the Pro Football Hall of Fame. And who hands out those gold jackets? The almost universally despised NFL commissioner, Roger Goodell. The Ginger Hammer, himself.

When Wolf accepted his jacket from Goodell, he took a moment to make light of the league’s persecution of New England Patriots quarterback Tom Brady, saying “Way to go on that Brady thing.”

The Rog had himself a chuckle about that.

Wolf’s son and Packers exec, Eliot, was on hand at the ceremony to put the jacket on his father. Eliot will also present his father during the enshrinement ceremony on Saturday, although we hear that will take place via video, rather than in-person.