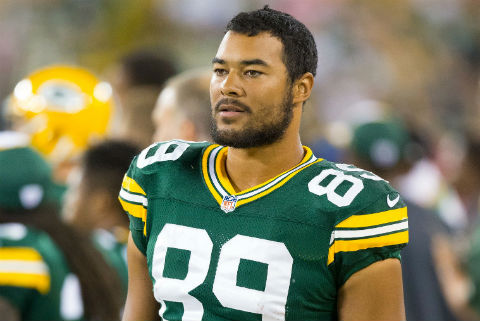 One Richard Rodgers, it appears.

Rodgers was a non-factor at tight end as a rookie, which isn’t totally surprising. Most rookie tight ends are non-factors, especially ones like Rodgers, who aren’t asked to block in college.

Rodgers began the season as a starter, but bungled his way to the bench to sit behind the vaunted Andrew Quarless. He would finish the year with 20 catches for 225 yards and two touchdowns.

But this is DickRodge’s year, yo!

“I think he’s definitely taken a step,” Packers coach Mike McCarthy said. “The thing I really like that he’s doing, he’s had some dominant plays in special teams. He blocked two punts today as far as punt rush. He’s taking a step offensively.”

That offensive step better be in the blocking department because that’s what’s going to get Rodgers on the field.

Here’s what we love about the good, old second-year jump, though. Lots of guys have supposedly made the second-year jump and some of them end up jumping right over to the waiver wire, rather than doing anything on the football field.

Here’s the other thing.

DickRodge was a hero in training camp last season. He was making plays all over the place. You were sitting there thinking, “Yeah, this guy is the next Paul Coffman.”

Then he went out and shat the bed in the regular season.

Training camp can often make mediocre players look good because they’re not always facing other players who are even going to make an NFL roster.

The point is, beware the second-year jump and beware putting too much stock into guys’ training camp performance.

If Rodgers improves — and it would be hard not to — then it’s just gravy for the Packers offense.

Previous Article
So, the Minnesota Vikings Had Family Day Yesterday…
Next Article
Eddie Lacy Went Down