Packers vs. Eagles: What to Watch 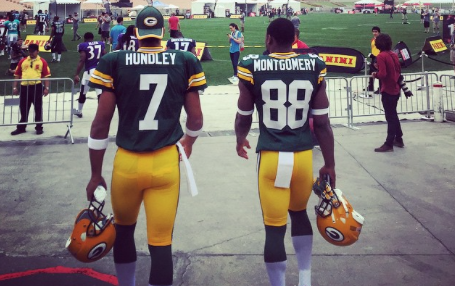 The Green Bay Packers will formally trot out onto Lambeau Field for a game for the first time in 2015, Saturday evening.

What should you be watching? Well, first of all, you should expect some really craptacular football because Aaron Rodgers probably isn’t playing.

You know, so good thing you bought tickets to go watch a bunch of backups and to pay the Packers way too much for a shitty cup of beer. But you’ll be shitfaced, so who cares!?

Anyway, here’s what to watch when the Green Bay Packers face off against the Philadelphia Eagles.

Third and Fourth-String Quarterbacks
That’s who appears likely to be running the Packers offense for the majority, if not the entirety of this game. Rodgers thinks he’s good to go until the regular season. Scott Tolzien has a concussion. So, that means Brett Hundley and Matt Blanchard are likely going to be out there taking their lumps against the Eagles No. 1 defense. And we’re not just saying they’re going to take their lumps, because they’re literally probably going to get killed. In addition to being overmatched, the Packers look like they’ll go without three starters on their offensive line. So look out, guys! What will actually be interesting here is to see if Hundley shows anything at all. We haven’t seen much from him or Blanchard in game action yet. They’ll have more than an ample opportunity to give us something. We don’t expect either guy to generate much offense, but it would be nice to see some flashes of future greatness (or even adequateness).

The Return of Brad Jones
I know. Like us, you had probably wiped all evidence of this shitbag from your memory. Well, sorry, but this turd is back in Green Bay this weekend. On the bright side, he’ll be mucking things up for the Eagles and not the Packers on this particular evening. Don’t be soft. Boo this motherfucker and boo him mercilessly.

The Rookie Cornerbacks
In our eyes, this is probably the best battle of camp. The Packers have got themselves what appear to be three pretty damn good rookie cornerbacks. They are first-round pick Damarious Randall, second-round pick Quinten Rollins and undrafted free agent LaDarius Gunter. Each guy has made his share of plays in the preseason games. Gunter may even be the best of the bunch and the bunch is solid, possibly spectacular. Frankly, we have no idea how the Packers can give all three of these guys playing time in the regular season. So, they’re pretty much scrapping for two spots (nickel and dime backs). Maybe one guy will separate himself from the pack. Maybe they’ll all just keep making plays, but something, eventually, has to give.

Clay Matthews
Yeah, this joker says he’s playing, which will be a first this preseason. So, you can maybe get somewhat of an idea of what the Packers first-team defense will look like come the regular season. You know, that is until Matthews bumps his groin/elbow/hamstring/knee and decides he’s had enough. Should be about two plays in.

Don Barclay and the Other Reserve Offensive Linemen
So, the Packers will be without left tackle David Bakhtiari, left guard Josh Sitton and right guard T.J. Lang. We expect Don Barclay to fill in at left tackle for the second straight game. Thus far, he hasn’t looked good. We’d like to think he’s still working off the rust from missing all of last season with a torn ACL. Or maybe he’s just regressed. Who lines up in the other two spots? We’re not entirely sure, although we’d expect J.C. Tretter to man one of them. The point is this. The Green Bay Packers need some dependable backup offensive linemen. We haven’t identified any yet. This game should give us a good idea of whether they even have any.

Ty Montgomery and Jeff Janis
Frankly, we don’t expect the Packers quarterbacks to complete many passes in this game due to point No. 1. However, of those few they do complete, it will be interesting to see who makes the bigger impact — Montgomery of Janis. The Packers will be looking to one of these guys to grab the No. 3 receiver role now that Jordy Nelson is gone for the year. Montgomery is a rookie and Janis hasn’t shown much other than the ability to run a fly pattern. So that doesn’t really make either of them very compelling options, but one of them will have to produce, at least marginally.

This Guy Has Way Too Many Packers Jerseys

This Guy Has Way Too Many Packers Jerseys