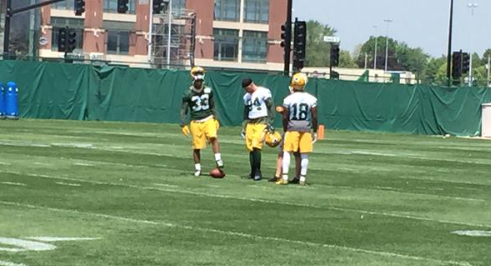 We’ve been wondering how long the Green Bay Packers will be willing to wait around for receiver Jared Abbrederis.

The answer appears to be at least a little while longer.

Coach Mike McCarthy seemed to suggest that while praising Abbrederis this week.

“Jared is a very good football player,” McCarthy said. “He’s one of those players you can [see] — obviously you saw in college and just the time he’s been on the field here — it comes easy to him. It’s natural. He’s instinctive. His route running, connecting with the quarterback in the passing game, he probably did that as quickly as anybody we’ve had around here.”

After missing all of his rookie season with a torn ACL, Abbrederis showed up for training camp and promptly suffered a concussion.

That happened on July 30 and there’s still no sign he’ll be able to return to the field anytime soon.

In the meantime, the Packers have released two other receivers who couldn’t seem to get on the field because of injuries. The only difference is those guys were both undrafted free agents and Abbrederis was a fifth-round pick in 2014.

It still looks like he’ll face a monumental task just to make the roster, though.

The Packers still have 10 other receivers on the roster. There will be six available roster spots for receivers, at best. Four of those are already locked up.

Time would appear to be of the essence.

Previous Article
Clay Matthews: Got to Take Care of No. 1
Next Article
This Guy Wants More Money Than Aaron Rodgers