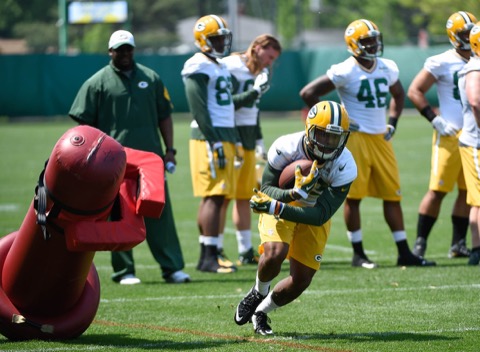 The Green Bay Packers released someone for the second time this week without even seeing him in a preseason game. In fact, they haven’t seen receiver Ricky Collins on the field during training camp at all.

Collins, an undrafted rookie from Texas A&M-Commerce, never passed his physical because of a heel injury.

That injury likely cost him any shot at a job with the Packers. It’s also fairly telling that the coaches feel they have plenty of good receivers who are practicing. With the time missed, you can assume Collins had zero shot of catching up.

So they cut an undrafted rookie. So what?

Well, Collins came to the Packers with a little bit of hype. They paid him a $5000 signing bonus, which is the most they paid to any undrafted free agent this year.

Although Collins played in Division II, he was borderline dominant with over 1,000 yards and 14 touchdowns as a senior. He also ran a 4.4. 40.

The Packers roster now stands at 87 players. Twelve of those 87 are still receivers.

Aaron Rodgers Has Some Thoughts on QBs Getting Punched

Of Course Jordy Nelson is a Farmer!

Of Course Jordy Nelson is a Farmer!