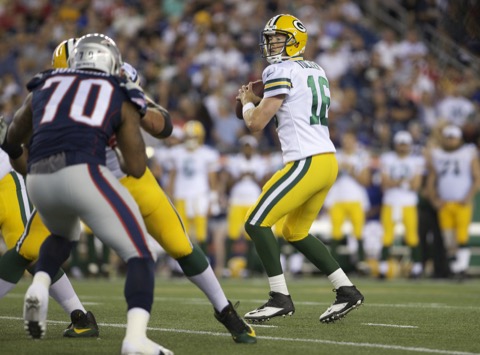 As is the case with most preseason games, the Green Bay Packers’ tilt with the New England Patriots was decided by guys who won’t even be on the field or possibly even on the team when the regular season rolls around.

In this instance, it was Packers third-string quarterback Brett Hundley who put the nail in the Patriots’ coffin. The fifth-round pick hit undrafted free agent running back John Crockett on a 10-yard touchdown pass with 7:42 left in the fourth quarter.

That provided the final margin in the Packers’ 22-11 victory over the Super Bowl champs.

Now on to what’s really important.

Let’s start with the first teams.

The Green Bay Packers offense, led by Aaron Rodgers for three series, was right back to their old tricks. They moved the ball at will and then bogged down when they got near the end zone.

More importantly, the Packers’ first team offense was 1-2 in the red zone, coming away with only three points. They were also 1-3 on fourth down.

While the running game looked good (Eddie Lacy averaged 7.2 per carry), the offensive line was far from midseason form. They allowed two sacks on Rodgers and numerous pressures, with some of the biggest gaffes coming from Mr. Pitch Perfect himself, left tackle David Bakhtiari.

On the other side of the coin, Tom Brady surprisingly played two series for the Patriots. Perhaps just as surprisingly, the Packers’ first team defense, which was without Clay Matthews, Nick Perry and Mike Neal, shut Brady down.

On backup quarterback Jimmy Garoppolo’s first series, the Packers defense broke down and paid for it when running back Jonas Gray went 55 yards off right tackle for a touchdown.

There was no containment on the outside, as outside linebacker Andy Mulumba got ate up by a blocker and inside linebacker Nate Palmer, who’s play it was to make, failed to get to the edge.

Gray ultimately broke it for a TD because safety Ha Ha Clinton-Dix took a craptacular angle and ended up slipping and/or getting pushed down in the middle of the field.

So if you want scapegoats for that play — Palmer and Clinton-Dix.

Now, let’s get on to the guys fighting for roster spots.

Here’s who stood out.

Outside linebacker Jayrone Elliott — last season’s preseason sackmaster looks like he’s serious about securing a regular season role for himself this season. Not only was Elliott the Packers most consistent pass rusher on the evening, he showed a much better feel for the rest of the game. Final line: eight tackles, half a sack, one tackle for loss and one QB hit.

Quarterback Scott Tolzien — we expected Scooter to come in and look like a solid backup QB and that’s exactly what he did. He threw nice touch passes and some rockets when he needed to. He also led the Packers to their first touchdown, hitting Jeff Janis for a 26-yard score with 5:11 left in the second quarter. Scoots finished 10-of-16 for 107 yards and TD.

Now, we’re sure a lot of you want to jump on the Jeff Janis bandwagon too, but he really didn’t do anything special. He ran right by his man at the line of scrimmage on the TD. The corner was so flat footed and unaware, he may as well have been Chris Conte. Janis only had one other catch, which went for five yards. You could see when the Packers tried to work Janis underneath that he couldn’t get any separation from the coverage.

Cornerback Quinten Rollins — you could argue that the Packers’ second-round pick should have had two picks, but we loved what we saw from Rollins nonetheless. He broke up three passes in the first half and caused another incompletion when he drove through a receiver and forced a drop. Rollins demonstrated great awareness and fundamentals for a guy who is supposed to be raw.

Cornerback LaDarius Gunter — you’ve probably heard the name. Gunter is the undrafted free agent out of Miami who has been making plays since he walked in the door. He made another one Thursday night, picking Garoppolo on the first series of the second half. He also knocked down a pass and had four tackles. It’s going to take a huge change of course for the Packers not to find a roster spot for this guy.

Running back Alonzo Harris — hey, we still like Rajion Neal as the third back. We still think Harris is a long shot to make the team. He certainly didn’t do himself any harm against New England though. Harris carried seven times for 41 yards and a touchdown. Granted, there was some Keystone Cops stuff going on by the Pats defense on that touchdown run, but Harris still took advantage of it.

Packers tight ends — seriously. We’re going to give the new play caller Tom Clements some credit here too. Based on this game, it looks like he’s making an effort to get the tight ends involved again. So there were opportunities and they were taken advantage of. Rodgers seemed to look to Andrew Quarless when he got in trouble and Quarless finished with two catches for 21 yards. Third-stringer Justin Perillo was most impressive of the group, though. Not huge numbers, with two catches for 21 yards, but Perillo made something of those opportunities.