Packers Get Killed By Eagles In Ugly Game 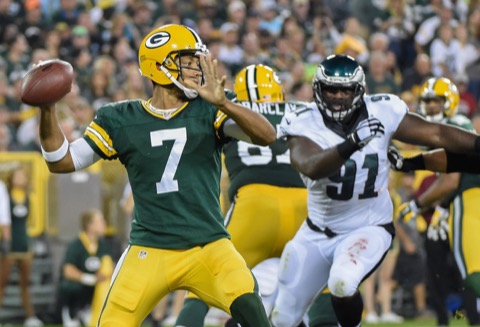 Well, if you do, then you were in for a treat if you tuned into the Green Bay Packers’ tilt with the Philadelphia Eagles on Saturday night.

I mean, not so much if you’re an Eagles fan.

If you’re that kind of idiot, then you’re surely frothing at the mouth, telling everyone around you how the Eagles just throttled the Packers 39-26 and are TOTALLY going to the Super Bowl this year, bro!

Sure, the Eagles offense did roll over and through the Packers first-team defense like they weren’t even there. And that defense did have the big, bad Clay Matthews for the first time this preseason, but no matter.

The Eagles first-team offense put up three touchdowns in the first quarter. Starting QB Sam Bradford went 10-for-10 and the Eagles completed their first 13 passes overall.

In other words, the Packers first-team defense was pure shit.

Among the shittiest performances was that of inside linebacker Sam Barrington.

Look, we like the guy, but he shouldn’t be covering Darren Sproles out of the backfield. Or anyone, for that matter, it appears.

Two of the Eagles’ first three touchdowns went to Sproles and tight end Brent Celek. Barrington was providing “coverage” on both of those. Barrington also provided the lowlight while trying to cover Sproles on a 33-yard completion early on.

Meanwhile, the Packers trotted out third-string quarterback Brett Hundley to start the game. He played behind a line that started backups Don Barclay at left tackle, Lane Taylor at left guard and Josh Walker at right guard.

Like us, you’re probably wondering who the hell Walker is. He was an undrafted rookie originally signed by the Colts in 2014. They released him and he ended up spending most of the season on the Packers’ practice squad.

He seemingly has played himself onto the roster this season.

But back to that offense.

It didn’t start off too well, with receiver Randall Cobb getting injured on the team’s first series. He went to the locker room shortly after and then the injury parade continued.

Starting right tackle Bryan Bulaga left with an ankle injury and then defensive back Micah Hyde got carted off with a neck injury.

A comedy of errors. Or horrors and we’re not even going to get into the massive amount of penalties.

Let’s get on to the players.

Brett Hundley — Yes, he threw a pick six to Walter Thurmond on his third series. We’re not even sure that was his fault, since it looked like Richard “DickRodge” Rodgers couldn’t decide whether to run a route or block on the play. Instead, he just decided to fall down like the sack of shit he is. Anyway, Hundley wasn’t great, but we were impressed with his command of the huddle. He never looked lost or rattled out there and finished a very respectable 22-of-31 for 315 yards, two touchdowns and that INT.

Ty Montgomery — Made his presence known with a 52-yard reception in the first half. He wasn’t much to talk about on returns, but Montgomery finished with two catches for 71 yards. We’d hand him the No. 3 receiver job, except for…

Jeff Janis — Yeah, we still pretty much think this guy can only run a fly pattern, but he does that really well. Three catches for 73 yards and a touchdown. One of those catches went for 29, on a fly, of course.

Myles White — The most impressive receiver for the Packers on the evening. He just made plays. Overall, nine catches for 89 yards, including one of those where he got mugged and still caught the ball. This guy has a roster spot on our team.

Rajion Neal — We’d like to say Neal sewed up that No. 3 running back spot on Saturday night. Four rushes for 23 yards. Five catches for 61 yards and a touchdown. Returned a kick for 31 yards. I mean, what do you want? Roster spot!

Kennard Backman — Backman is a sixth-round pick. We noticed him for the first time last week. We actually took note of him for the first time this week. Two catches for 19 yards and a touchdown. We don’t really expect him to provide the Packers with anything in the regular season this year, but it looks like this guy can play in the league.

Tim Masthay — Listen, you ginger fuck, get it the fuck together! Masthay averaged a disgusting 37.2 on four punts. The announcers spit out some stat during the game that was even more disturbing. That Masthay’s average is (if memory serves) 44th out of 48 punters this preseason. That means he’s worse than a bunch of guys who are going to be out of a job very shortly. So the Packers brought in competition for Masthay in the offseason and what did they do? Cut that guy a couple weeks into camp. Boy, does that look brilliant right about now.

And with that, we’re going to sit back and prepare for the worst on Randall Cobb.