Packers’ First Depth Chart is Out

It’s labeled as unofficial, but we don’t really expect much to change other than someone to throw an “official” label on it.

Not a lot of surprises. 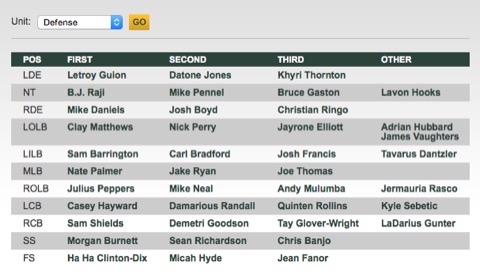 There are a few interesting things, though.

Clay Matthews is listed No. 1 at outside linebacker, but will most certainly be playing inside this season.

Letroy Guion is listed as a starter at defensive end. Guion played the nose last season, but as expected, with B.J. Raji back, Guion will shift outside and send Datone Jones to the bench where he belongs.

Also as expected, Casey Hayward gets one of the starting cornerback spots. What’s perhaps more surprising than anything is LaDarius Gunter is buried on this depth chart. He’s a kid who has been making plays since he stepped in the door and has a great shot of making the team, in our estimation.

On offense, Richard Rodgers gets the nod over Andrew Quarless at tight end and it seems pretty clear that Jared Abbrederis is going to have a hard time making the roster. He’s behind both Jeff Janis and Myles White.

White, by most accounts, seems to be having his best camp to date.

And how about QB, where fifth-round draft pick Brett Hundley is listed fourth? Matt Blanchard, who played at UW-Whitewater, was signed as a street free agent.

Hundley will be getting a roster spot, but it appears the coaching staff is high on Blanchard.

Davante Adams Made This Badass Catch

Davante Adams Made This Badass Catch