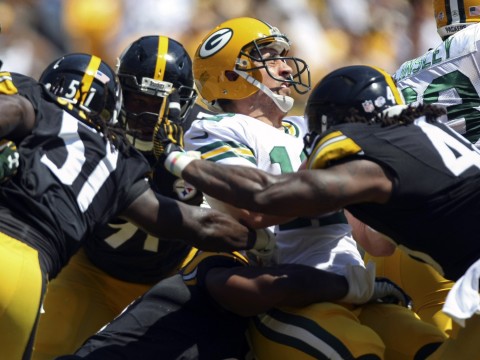 The Green Bay Packers dropped a 24-19 decision to the Pittsburgh Steelers in their second preseason game and, in the process, lost leading receiver Jordy Nelson for what appears to be the 2015 season.

What’s even the purpose of playing your starters in these idiotically meaningless games?

We’re not sure, but these injuries happen every year and the Packers will be just fine, in our estimation.

We’re here to talk about the game though.

Per usual, the final score was as it was because of some guys who probably won’t be on an NFL roster in a few weeks. The Steelers scored two fourth-quarter touchdowns, as quarterback Landry Jones hit Tyler Murphy from 22 and then Shakim Phillips from 20 about six minutes later.

The Packers first-team offense looked sharp behind Aaron Rodgers, who was 4-of-5 for 57 yards before exiting the game after two series, and Eddie Lacy. The bruising tailback ran six times for 30 yards and a touchdown.

What wasn’t impressive was the Packers offensive line. Don Barclay was filling in for David Bakhtiari at left tackle and gave up the sack that gave the Steelers their first score, a safety with just under 3:00 to go in the first quarter.

Overall, the Packers offensive line gave up six sacks, which is utter garbage.

The Packers first-team defense wasn’t necessarily anything to write home about, but they showed flashes here and there. They once again played without linebacker Clay Matthews, who will surely come up with another ailment this week so he doesn’t have to play.

The defense was able to slow the Steelers running game well enough, with Le’Veon Bell averaging only 2.7 yards per carry. However, the pass defense wasn’t as effective. Pittsburgh quaterback Ben Roethlisburger was 11-of-14 for 100 yards and touchdown befored exiting.

So let’s get on to who we noticed.

Scott Tolzien — 11-of-19 for 102 yards and a touchdown. We’re not going to suggest that the Packers offense wouldn’t miss a beat if Tolzien came in during the regular season, but Scooter looks better than Matt Flynn. He also looks like a guy the Packers can win games with if disaster were to strike. Get on with your bad self, Scoots!

Jeff Janis — A week after we were talking about how this guy couldn’t get any seperation while in traffic, he did just that. Janis only had three catches for 25 yards on seven targets, but it looks like he’s starting to be able to do the things we didn’t think he was capable of. That is, do something other than run a straight line down the field. Since it now looks like the Packers will need Janis to contribute this season, that’s a good sign.

Carl Bradford — We’ve been waiting for this guy to do something, anything, since he was drafted. Bradford didn’t exactly set the world on fire, but had five tackles, including one for a loss. That was the second-highest total on the team. Maybe this guy is finally showing he might be worth keeping around.

Damarious Randall — A week after second-round pick Quinten Rollins was the defensive star, first-round pick Randall distinguished himself. In his first NFL action, Randall had three tackles, a pass defended and his first interception. The Packers have the makings of a pretty good secondary, where it’s going to be tough to come by playing time.

Bruce Gaston — Alright, we weren’t ready to jump on this guy last week, but we might as well now. Two games, two sacks. Gaston also tallied two QB hits. The Packers will be down two defensive linemen, with Letroy Guion and Datone Jones being suspended to start the season. Former third-round pick Khyri Thornton doesn’t look like he has much of an NFL future. Maybe Gaston does. And maybe he can help.

LaDarius Gunter — The undrafted rookie cornerback just continues to make plays. Three passes defended against the Steelers. This guy better be getting a roster spot.

And with that, we’ll start looking toward the next meaningless game and the next ACL tear.