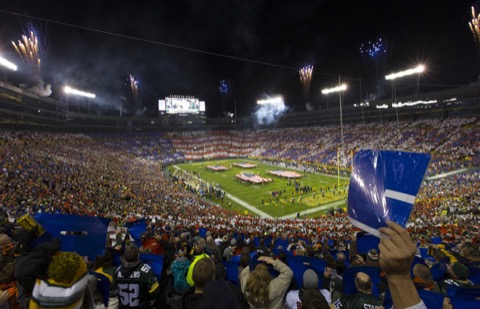 The Green Bay Packers have partnered with Extreme Networks and Verizon wireless to provide wifi throughout the hallowed grounds of Lambeau Field. Because watching the Green Bay Packers at home, at the veritable cathedral of football, just is not enough to keep some folks entertained.

Why is this needed — and how in the world can this possibly contribute to what is supposed to be a formidable home field advantage, so often cloaked in flowery language about the “mystique” and “aura” of Lambeau Field? With a season ticket waiting list as long as life expectancy itself, the Packers have no problem attracting fans to the seats. All indications are, however, that they do have a problem getting fans riled up, making noise when the defense is on the field or when the offense makes a killer play.

This will not help, precisely because the human mind is not capable of concentrating on two things at once. Just as one cannot walk or drive while texting, one cannot devote full attention to the Packers on the field and league-wide stats or the inanity of fantasy football at the same time. And why do Packers fans even have fantasy football teams? One team should be enough — the real team that actually exists, the Green Bay Packers.

Here’s a tip from your Uncle Wolfie: put down the stats, put down the fantasy football bullshit, and put down the goddamn smartphone and watch the game on the field!

One would hope the draw of seeing the Green Bay Packers play at Lambeau Field would be enough of an attraction to put down the smartphones and direct full and complete attention to the game. After all, for some it is a once in a lifetime experience, a highpoint in many devoted fans’ lives. Those who have made the pilgrimage in some ways can say they are Muslims of sorts, for they have been to the true Mecca!

Let us hope that the vast majority of Packers fans in the seats are uninterested in such petty diversions and stay focused on what matters most — the on-field play of our Green Bay Packers!

Otherwise, some in the seats might just miss that exhilarating touchdown pass by Aaron Rodgers, not to mention react in kind with the crazed fanaticism properly exhibited by true Packers fans: crazed fanaticism that requires one’s full attention and devotion to those men on the field wearing the Green and Gold.