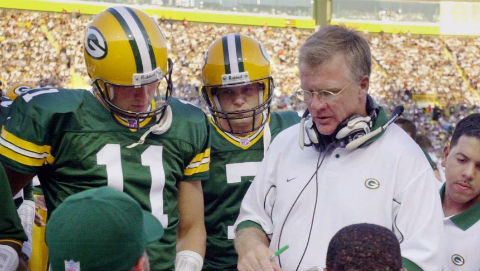 Were you aware that Matt Hasselbeck is still in the league? He’s Andrew Luck’s 39-year-old backup in Indianapolis.

That makes him an old timer by NFL standards and that means he’s got some stories. On Tuesday, the Indianapolis Star dusted off Hasselbeck and asked him about his first NFL training camp. If you haven’t been around long, Hasselbeck was a sixth-round pick of the Green Bay Packers all the way back in 1998.

Hasselbeck told the Star he didn’t even think he’d make the team. He was more concerned about the attire.

“I didn’t expect to make the team on Day 1,” Hasselbeck remembers. “I was just hoping when they cut me I got to keep a pair of those cool Packers shorts.”

He ended up sticking with the Packers on their practice squad that first season and then went on to back up Brett Favre. He did that well enough that the Packers were able to parlay Hasselbeck into a third-round draft pick by trading him to Seattle, where he went on to have a pretty decent career.

The trade, specifically, was the Packers’ first (17th), seventh and Hasselbeck for Seattle’s first (10th) and third.

Hasselbeck also has a story about putting worms in Favre’s chewing tobacco tin.

You can read the whole article here.

Packers vs. Patriots: What to Watch