It Seems Like a Rookie Should Replace Casey Hayward 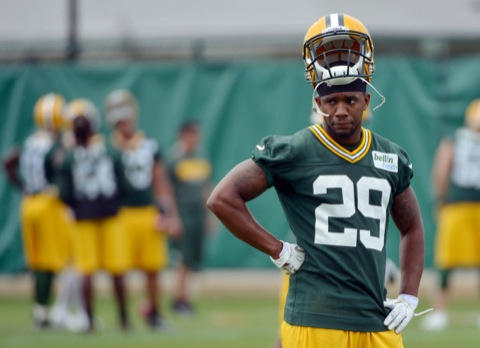 This had occurred to me prior to the Green Bay Packers’ third preseason game. The Packers had three rookie cornerbacks playing some really good ball. They had a de facto starter in Casey Hayward playing some very non-descipt ball. So why shouldn’t one of these rookies replace Hayward in the starting lineup?

All three guys have shown evidence of being — if not really good — then definitely very solid.

I let that thought pass for the simple reason that I couldn’t distinguish which of the three rookies was the best cornerback. I figured, let’s watch this third game and see if one guy separates himself from the pack.

Well, unfortunately, that didn’t happen. All three of the rookies played, but none of them did anything notable.

If I had to choose a pecking order, I’d go Rollins, Gunter, Randall. But if you asked me in a hour, I might go Gunter, Rollins, Randall. Somehow, at the same time, I wouldn’t have any problem if Randall were first in the order.

You get the point. These guys have all played well and it’s hard to say who’s the best of the three right now.

What I am now pretty certain of is they’re all more deserving of playing time than Hayward.

Hayward was pretty much handed the starting spot when camp opened. Hayward had a hell of a rookie year, with six picks, but hasn’t done much in the two seasons since. However, he’s shown the ability to make plays from time to time and has always been saying that he can play outside and that he can start.

So, it’s fine that the Packers gave him a chance to do that.

What has he done with that chance? Not much.

He’s demonstrated that the main thing we always bash him for is still a major problem. The guy can’t tackle and that’s fine if you’re Deion Sanders, but Hayward is not Deion Sanders.

And that’s a nice segue because the reason you dealt with Deion not tackling (or even trying to tackle, in many cases) is because that clown made plays. Game-changing plays.

That seemed to be what Hayward was about. His tackling will get better, they said. This guy makes plays!

Except that he doesn’t seem to do that anymore either.

Hayward started seven games as a rookie, when had those six picks. Due to injury and ineffectiveness, he’s started only two games since. He’s also only had three picks since.

In short, he seems to be regressing. And look, the Packers gave Hayward his shot outside and that certainly doesn’t appear to be the best place for him. He just doesn’t seem physical or athletic enough to match up with the receivers who line up outside. He may not even be fast enough anymore.

Hayward’s only NFL success has come in the slot and that appears to be where he needs to play.

That is, if he plays at all.

Throwing these rookies out there means they’re going to do some rookie things and take some lumps. But let’s look at it realistically.

Randall, Rollins and Gunter all appear to have a greater upside than Hayward does at this point. If they’re equal to or even close to Hayward’s ability level right now, which we’re pretty confident is the case, then they need to be on the field.

What are we suggesting?

Hayward go back to where he was last year when he got pushed down the depth chart by Davon House and Micah Hyde.