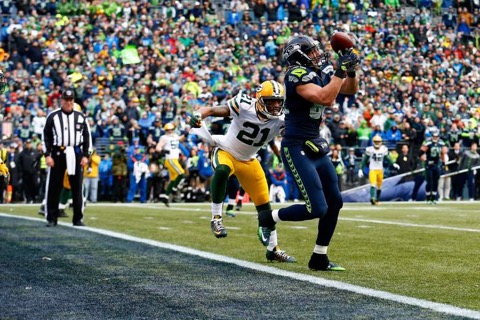 You remember that play right there. It was the NFC Championship game. On a two-point conversion try late in the game, Seahawks quarterback Russell Wilson rolled right… and then rolled right some more… and then heaved a wounded duck of a pass across his body to the opposite side of the field.

Fortunately for Seattle, the Green Bay Packers had a one percenter defending on the play. Safety Ha Ha Clinton-Dix, who just so happens to be the one guy out of 100 that doesn’t make the play to foil the try.

And you know how that worked out.

So what happened, Ha Ha?

“Misjudged the ball,” Clinton-Dix said. “Saw it in the air and thought I had a play on it and misjudged it.”

And here is my response.

“Well, no fucking shit you misjudged the ball. The only possible way you could have misjudged it as badly as you did was if you suffered temporary blindness, an out of body experience or spontaneous combustion. And I did not see you burst into flames, so which of the other two was it and will this be a recurring problem?”

I guess if there’s a silver lining here, it’s that Clinton-Dix says he’s moved on.

Great. Because you know what we can’t get out of our heads? That dopey play right there reminds of another colossally idiotic play made by a rookie Packers defender that cost the team a shot at the Super Bowl — 4th and 26.

Let’s hope we eventually have something better to remember Clinton-Dix by because that’s the only thing we’re ever going to remember about Nick Barnett.