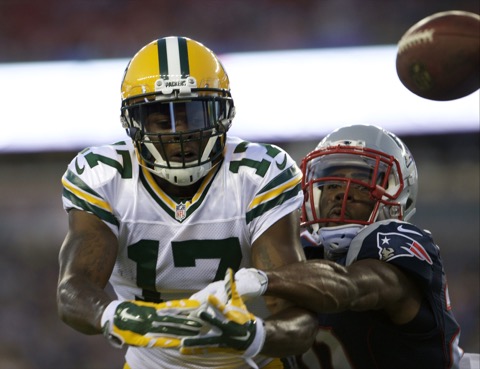 Yes, it was a meaningless preseason game, but learned a few things in the Green Bay Packers 22-11 win over the New England Patriots. Or at least we noticed a few things.

After further mulling, here are five more thoughts on the game.

Is this the plan for Lacy?
In past years, with coach Mike McCarthy calling plays, the Packers barely used running back Eddie Lacy in the first half of the season. They did so by not running the ball very often. That kept Lacy fresh for the second half of the season and he has pretty much dominated the final eight games during both of his NFL seasons. Well, if Thursday’s game is any indication, new play caller Tom Clements has a different plan to keep Lacy fresh. More James Starks. The Packers’ No. 2 running back, who was a forgotten man at times in 2014, got plenty of action with the No. 1 offense. He carried five times for 12 yards and caught three passes for 38. You certainly could assume that the Packers were going light on Lacy because it’s preseason, but we’ve all seen the results when Lacy is rested and ready for the stretch run. Starks is capable, so why not give him the ball more?

Looking for an impact
Two guys we singled out before the game as needing to make an impact were 2014 fourth-round draft pick Carl Bradford and third-round draft pick Khyri Thornton. Well, Bradford, who worked at inside linebacker late in the game, had a sack among his two tackles. We’ve been pulling for this guy, but despite that sack, he just doesn’t seem to look the part. Thornton, a defensive lineman, worked much earlier in the game. He finished with one tackle. So neither guy really did anything to reverse our thinking. Both of these guys are going to have trouble securing a roster spot.

Datone Jones has fallen
The Green Bay Packers were without defensive linemen Letroy Guion and Mike Daniels on Thursday night. Both guys stayed in Green Bay to nurse injuries. That left the defensive line with B.J. Raji, Mike Pennel, Datone Jones, Josh Boyd, Khyri Thornton and some guys we’ve never heard of. Despite that lineup, former first-round pick Datone Jones was on the second team. Now, we’re not terribly surprised. Jones has been nothing short of a disappointment in his two seasons in Green Bay. But the Packers were thin on the line and Jones was a starter last season. Yet, when the defense walked out for the first series, the defensive line was Boyd, Raji and Pennel.

More like Carappolo
Everyone was raving about rookie cornerbacks Quinten Rollins and LaDarius Gunter after the game. And for good reason. They both made plays and both looked like they belong. But before everyone gets too excited, they made those plays against Patriots backup QB Jimmy Garoppolo. And let’s face it. That guy is awful. If this Tom Brady suspension is upheld, the Patriots will be lucky if they win one game with Carappolo at the helm.

Davante Adams looks like a big part of the offense
We all knew the Packers were going involve second-year receiver Davante Adams more this year. We got a glimpse of that on Thursday. Adams only caught three balls for 17 yards, but he was in the game from the start and Aaron Rodgers looked his way on numerous occasions. Adams had a team-high seven targets. Andrew Quarless was second with five. Of course, considering he only had three catches in seven targets also shows that Adams still needs some polish.