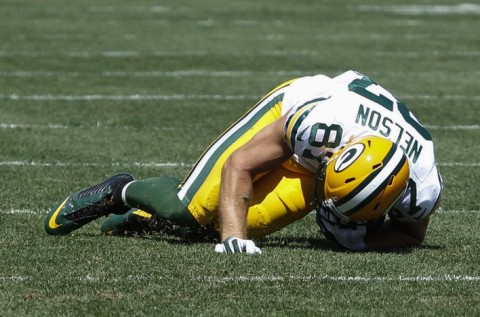 Receiver Jordy Nelson’s injury is going to overshadow this game in any shape or form, but let’s try to put that aside for a moment.

We have a whole football team to worry about. Here are five more thoughts on the Green Bay Packers’ 22-19 loss to the Pittsburgh Steelers.

Richard Rodgers is probably the guy at tight end
We’ve been hearing that the starting tight end job was Richard Rodgers’ to lose. DickRodge didn’t do anything to lose it on Sunday, with three catches for 30 yards and a touchdown. Meanwhile, his chief competition, Andrew Quarless, had one reception for 17 yards. We’re not overly excited about either of these guys, but if Rodgers can continue to improve then hopefully the position won’t be the garbage dump it was last year.

No one seized the No. 3 running back job
There was A LOT of talk last week about how Rajion Neal, John Crockett and Alonzo Harris were neck and neck (and neck) to be the Packers’ No. 3 back. After Sunday’s game, we wouldn’t be surprised if the Packers keep just two halfbacks. Neal ran four times for 11 yards (2.8 per carry), Crockett two for 6 yards and Harris one for 3 yards. Crockett did add two catches for 13 yards. So that probably means he had the best day of the three. You can’t really blame these guys for their lack of involvement, though. Someone has to call a play for them. That said, no one really distinguished himself in his limited opportunities.

Yeah, we see you Datone
Datone Jones is one of our favorite whipping boys because, play like a first-round pick, you assclown. Well, Jones had a sack on Sunday, his third of the preseason. Thing is, all of those sacks have come against second- and third-team guys. Jones SHOULD be dominating those type of guys. If he could actually do anything against first-team guys, then we might be impressed.

Still going for two in the regular season?
I think we can say this is a pattern now. The Packers score. The Packers go for two. They’ve done it after just about every one of their touchdowns so far this preseason. Normally, we’d just assume they were practicing their two-point conversions, but with the extra point moved back — it’s now a 33-yard kick — we expect some teams to go for two more often. Will the Packers be one of them? Well, we’ll see when week 1 rolls around. For now, the answer appears to be maybe.

Don Barclay has not rounded back into form
Hey, we like Don Barclay. Don Barclay had himself his second consecutive crap game on Sunday, though. Barclay started at left tackle in place of David Bakhtiari. That probably wouldn’t have been the case if this were the regular season. Barclay likely would have started at right tackle and Bryan Bulaga would have moved to left. That being said, wherever he plays, it looks like Barclay is not fully recovered from the torn ACL he suffered prior to last season. A lot of that could be mental, but he’s getting beaten like a rented mule on a regular basis when the Packers drop back to pass. He better get it together soon or the Packers are going to have to look at other options for the backup tackle spots.