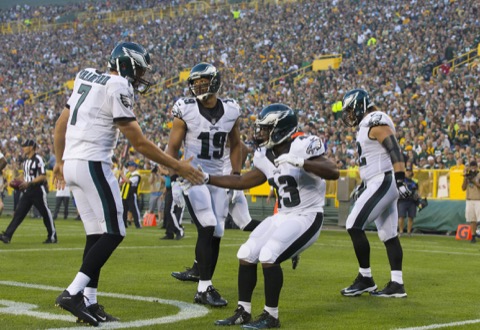 The Green Bay Packers are now 1-2 in the 2015 preseason, thanks to a 39-26 loss to the Philadelphia Eagles on Saturday evening.

While we give no shits about preseason records, we are a bit concerned about how dogshit awful the Packers looked in two phases of the game in the second-to-last week of preseason football. And we’re not even talking about the offense, which started a third-string quarterback and three backup offensive linemen.

That unit was actually the highlight of the evening, even while losing two more starters to injury.

The Packers first-team defense was complete garbage and the special teams as a whole were atrocious.

But let’s get on to it. Here are five more thoughts on a game that will excite no one except for Eagles fans.

Who let Shawn Slocum back into the building?
The Packers new special teams coach, Ron Zook, must have had nightmares last night. After two relatively uneventful — and we say that as a good thing — games on special teams, the Packers resorted to their old tactics against the Eagles. It’s as if Slocum were once again coordinating that unit. It started with a 67-yard kickoff return by Raheem Mostert to open the game. That wasn’t the lowlight though. That would be the eight penalties the Packers piled up on special teams, followed closely by punter Tim Masthay’s continuing shit performance. And we may as well also throw in the 51-yard field goal Mason Crosby bounced off the right upright. In all, the special teams was a disaster. We’re not going to dump all of that on Zook, although he does deserve some of the blame. You could certainly blame some of the penalties and coverage issues on guys who aren’t going to be on this or any NFL roster in a very short time. The Packers were trying to take a look at everyone on Saturday. The coverage units will tighten themselves up by subtraction, so there’s no need to panic here.

We know who the top backups on the offensive line are.
After two subpar games, Don Barclay had a solid game at left tackle for the Packers on Saturday night. Barclay didn’t give up any sacks for the first time this preseason. One game is not a great sample size, but perhaps Barclay is rounding back into form after that ACL injury. As we noted, the other two fill-in starters were Lane Taylor and Josh Walker. From what we could tell, both looked adequate. In fact, people couldn’t stop blathering on about how well Walker has performed this preseason during the broadcast. It would appear the Packers are in pretty solid shape if they incur an injury on the offensive line this season.

There were a couple of interesting starters on defense.
Mike Neal started at outside linebacker and Josh Boyd started at defensive end against Philadelphia. Normally, we’d expect Letroy Guion to be at defensive end, but it makes sense that the Packers would give Boyd the work because Guion is suspended for the first three games. Neal was a bit more surprising. We just assumed that Nick Perry was injured because, well, Nick Perry is always injured. However, Perry wasn’t injured. He played, he just did so after Neal. That could be because he’s been injured for most of the preseason. It could be because the Packers feel Neal is playing better. We’ll see when the regular season starts.

The defense is going to take time to gel.
You either saw or have heard how shitty the Packers first-team defense played Saturday night. What’s worse is they were stronger in that game than they’ve been all preseason. Both linebacker Clay Matthews and defensive end Mike Daniels made their first preseason appearances. Nick Perry and Mike Neal were both somehow healthy and active. The only regular who wasn’t active was defensive end Datone Jones and he’s next to useless anyway. And yet, they still got rolled by Philly’s offense. These guys are going to have to get some time together to pull it together from what we can see. And since the starters aren’t likely to play much in the final preseason game, it looks like that will have to occur in the regular season.

This is a frightening stat.
We mentioned this already, but Sam Bradford, the Eagles’ starting QB, was 10-for-10 on the night. That’s not even the scariest thing, though. Overall, the Eagles four quarterbacks were a combined 30-of-40 for 314 yards, five touchdowns and no interceptions. Their combined rating was 136.1. The Eagles quarterbacks are Bradford, Mark Sanchez (Nacho!), Matt Barkley and Tim Tebow. Those guys combined haven’t made a single Pro Bowl. Chew on that for a moment.