Clay Matthews Will Grace Us With His Presence This Week 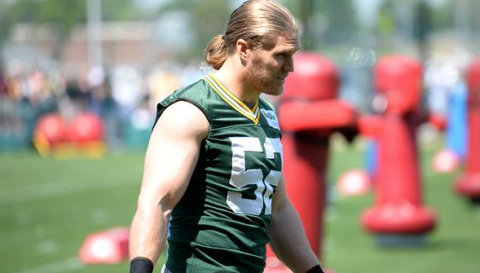 All of you clowns with Clay Matthews jerseys can rejoice. Your boy has decided to grace us with his presence this week!

So, go and dust off that jersey and wear it proudly. You probably won’t get many more chances to do so.

Matthews resumed practicing on Wednesday and says he plans on playing when the Green Bay Packers face the Philadelphia Eagles, Saturday night.

That will be the first preseason action for Matthews this year. He has been battling “knee soreness,” a phantom elbow injury and vagina tightness.

Immediately after making that statement, Matthews pulled a hammy walking back to his locker.

Matthews went on to say that his elbow problem wasn’t fully healed and then refused to talk about it.

“The elbow is actually something that we’re dealing with from a medical staff standpoint,” Matthews said. “That being said, it’s good enough to get back out there. Very, very limited as far what I’m going to talk about. But I feel good. We’ve just got to be smart as far as personal health.”

You know, got to be smart.