Andrew Quarless Has Returned, But Not Practicing 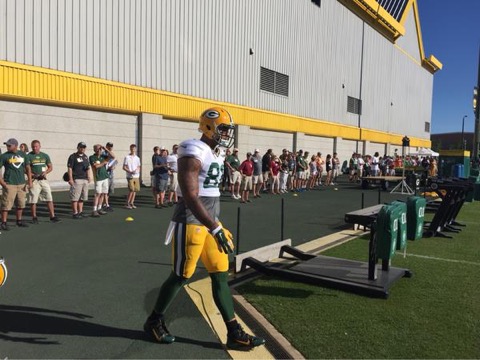 Quarless has been in Green Bay since training camp began, but was dealing with a family issue, according to Packers coach Mike McCarthy. Although he suited up on Saturday, Quarless did not take part in practice.

“Andrew obviously has been gone because of what him and his family have been dealing with,” McCarthy said after practice. “A) You have to make sure he’s okay. As far as his workload, treat it like it’s his first day. We had the walk-through at the end of the first two practices. We’re being really smart with his reps.”

It’s still unclear what sort of personal issue Quarless has been dealing with. However, it doesn’t appear to have anything to do with his arrest back in early July.

You do have to wonder where Quarless’ head is at right now. Judging by McCarthy’s comments, it’s probably somewhere besides football.

James Jones Signed with the Giants

Randall Cobb is Cool with Return Duty; We’re Not

Randall Cobb is Cool with Return Duty; We're Not