Aaron Rodgers Says It’s Nice to Be Back 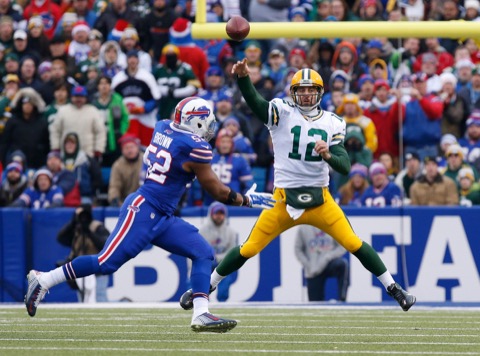 We talked about it on Thursday — the fact that Green Bay Packers quarterback Aaron Rodgers is mobile again and what that means. Rodgers, who was limited by a calf injury in the final games of the 2014 season, concurred with coach Mike McCarthy’s assessment.

“I was a pocket quarterback at the end of last year because of the injury,” Rodgers said. “I’m back to playing the way I like to play, which is to extend plays when I can and get rid of it when I need to. [When] I have an opportunity to escape the pocket and create a different angle, then I’m going to. It’s nice to be back.”

The Packers can certainly win games with Rodgers as a pocket quarterback, but they’re much more dangerous when Rodgers has full mobility.

He’s able to extend plays, which puts further pressure on the defense and gives his receivers more of an opportunity to get open. It’s almost like sandlot football.

Defenses can study the Packers offense all they want, but when those plays get extended and guys just start running to open spots on the field, knowing the offensive tendencies doesn’t matter.

We’re getting excited to see this offense unleashed again. Is the regular season almost here?