Aaron Rodgers Has Some Thoughts on QBs Getting Punched 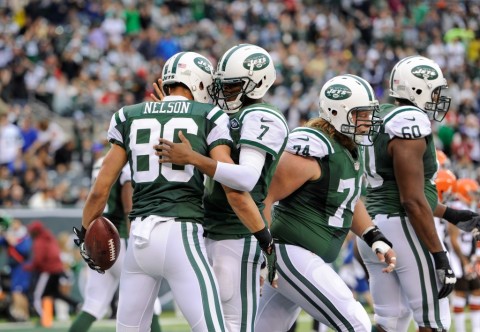 You all probably heard. On Tuesday, New York Jets quarterback Geno Smith got punched in the face by a teammate over $600. Smith will miss up to 10 weeks with a broken jaw. The guy who punched him got released.

And this happened in the locker room. Not on the field in the heat of battle.

Because that’s how the New York Jets roll. And that’s why Geno Smith is a great quarterback.

Because he commands respect in the locker room.

Naturally, Green Bay Packers quarterback Aaron Rodgers had plenty of thoughts about this. About scuffles on the field. About being a pro. About what should or shouldn’t happen in the locker room. About getting jacked in the face.

Aaron Rodgers had some candid comments on the Geno Smith incident. pic.twitter.com/O4mHinhR9Q

Rodgers also had this to say to the local guys.

Can you imagine something like this happening in Green Bay?

Of course you can’t.

While we have plenty of issues with the people who run the organization, we can say they’re not a bunch of clowns. Clowns run organizations in places like Cleveland, Jacksonville, Minnesota, and obviously, New York.

And clown shows are entertaining, but they don’t win football games.