When Travis Jervey Set Himself on Fire and Bought a Lion 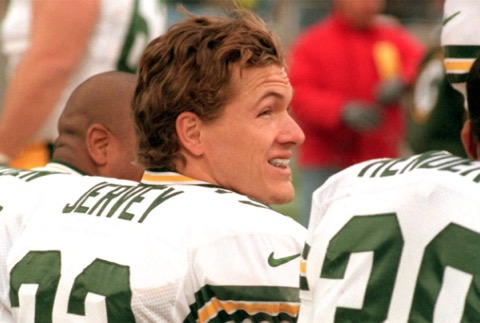 We remember Travis Jervey as a really fast white guy who was a pretty good special teamer for the Green Bay Packers during the Walrus era.

Apparently, he wasn’t too bright.

Because it’s Brett Favre week — or at least that’s what Sport Illustrated would like us to believe — fat man Peter King went and dug out one of his old nugget-laden stories about Favre and the Packers. The greatest part of said story is about Travis Jervey though.

Specifically, that he almost blew himself up and he bought a lion.

While his assistants focus on the game plan, (coach Mike) Holmgren has a disciplinary chore to attend to. He has heard that his two frisky-pup running backs, second-year man LeShon Johnson and rookie Travis Jervey, are about to get into more trouble. The two share a house out in the Wisconsin sticks, and they have already been cited by the state’s Department of Natural Resources for having illegal deer snares in the backyard. That prompted a $200 fine for each player from the DNR. Just last week, while building a fire in his fireplace, Jervey had poured gasoline on the kindling and then struck a match. The fumes and the gas exploded, igniting Jervey. He rolled around on the floor, snuffing out flames that singed his eyebrows and eyelashes and the hair on his arms and legs.

And now, Holmgren has been informed by some other players, Jervey and Johnson have ordered a lion from a Texas wildlife distributor. “Just a little one,” Johnson says. “And he’s had his claws taken out, and his canines. He can’t hurt you.”

Jervey and Johnson paid $1,000 for the lion, but it hasn’t been delivered yet. That’s good. “You can’t buy a lion,” Holmgren says. “No lion.” The order is canceled.

Jervey actually managed not blow himself up or get eaten by an exotic animal long enough to carve out a pretty nice NFL career for himself. He was with the Packers from 1995-98, making the Pro Bowl as a special teamer in 1997. He would play five more seasons (in San Francisco and Atlanta) after leaving the Green Bay.