That Story About Vince Lombardi Trading Jim Ringo is False 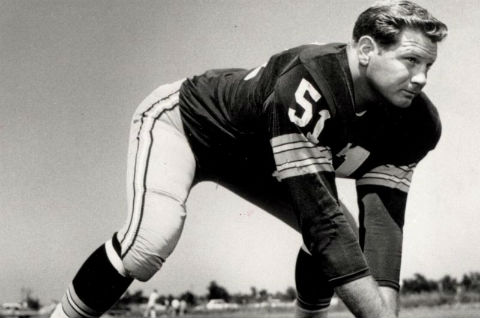 It goes something like this. During the 1964 offseason, center Jim Ringo — then an 11-year veteran and a first-team All Pro during each of the five previous seasons — showed up with an agent to negotiate his new contract. Vince Lombardi hated agents and preferred to negotiate with his players one-on-one. Thus, Lombardi sent Ringo packing to the Philadelphia Eagles.

The story about why Lombardi traded Ringo is totally false, however. A myth that Lombardi allowed people to believe.

Here’s how it really went down, according to Lombardi’s director of player personnel, Pat Peppler.

“That was not true. It was a prevalent story and the falsehood that was told — I think Vince thought it was to his advantage to go along with it.”

“When I called Ringo the next year, before the 1964 season, I had talked to Vince about it. And when I got a hold of Ringo he started to complain about this and complain about that and complain about his contract. I said, ‘Wait a minute, Jim. You wrote your own contract last year and the old man gave you $1,000 more than you asked for.’ Then he said, ‘Give me $25,000 or trade me.’ I went to Vince and told him. I said he wants $25,000 or he wants to be traded. I’m sure Vince had already been working on a trade, but he liked to make it seem like he did it snap. Anyway, he gets a hold of Philadelphia, makes the trade and, within an hour, called me back and said he was calling Ringo. No agent.”

Ultimately, Ringo’s complaining and the fact that he was getting older is what got him traded.

He would go on to play four seasons with the Eagles, making three Pro Bowls. Of course, the Packers would be just fine at center. Ken Bowman manned the spot for the next 10 seasons.