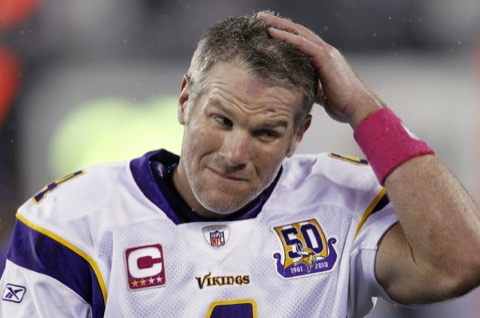 Remember back when Brett Favre was demanding to return to the Green Bay Packers and be their starting quarterback and the Packers offered him $20 million to stay retired?

That was deemed a “personal services contract” and those in the organization said Favre would essentially be an ambassador of the Green Bay Packers. Of course, that’s all bullshit. The Packers were just trying to pay Favre to go the fuck away and not embarrass them or himself.

Ultimately, Favre told the Packers to shove it and engineered his way to the Minnesota Vikings out of spite.

But things are all rosy between the Packers and Favre now! None of that ever happened!

Packers president Mark Murphy was asked about that very offer earlier this week. Obviously, if it was legit then, why wouldn’t the Packers give Favre a personal services contract now that everyone has glossed over all the douchebaggery?

So the Packers won’t be paying Favre to be their mascot or whatever you want to call it. Nor are we suggesting they should, but the good old personal services contract is a handsome reminder of what many of you have chosen to pretend never happened.

Not to worry though.

Wonder if they have a No. 4 Vikings jersey in there?