It seems that, once again, yours truly has been vindicated. As the Green Bay Packers are spamming social media with constant updates about so-called “Favre Week,” one announcement was of particular note: namely that the Packers Pro Shop is now stocked full of Brett Favre merchandise, to coincide with his ham-fisted return to the fold with the Packers Hall of Fame and number retirement ceremony this week.

#FavreWeek has made its way to the #Packers Pro Shop! pic.twitter.com/yy7D1he5zn

“Brett Favre” is of course to be pronounced as one word, a la John Madden: BRETTFAVRE!

One wonders if this will also include Jets and Vikings memorabilia.

In almost prophetic fashion, I wrote: “[Among] the reasons to go forward with this reconciliation of sorts, no matter how much certain persons on both sides have to hold their noses,” is the “boatloads of cash the Packers organization stands to make by peddling schmaltzy Brett Favre merchandise.”

Actually, perhaps it is not so prophetic given how transparent and obvious the real impetus driving both parties together is. This reunion is not about doing the right thing, or even a general reconciliation where both sides have actually truly forgiven each other. Does anyone really think the ex-Packer really wants to see the Packers win additional Super Bowls, which would seem to be the true litmus test for putting this man up there with the likes of Bart Starr, Ray Nitschke, Reggie White or the like?

Even Charles Woodson, despite not getting the fair shake he deserved, most certainly still hopes to see the Packers fulfill their destiny. This is about none of that — it’s about selling overpriced merchandise to sprawling minions of fans, not all of whom are really Packers fans.

Describing this stuff as “schmaltzy” sure was prophetic however. Take a gander. 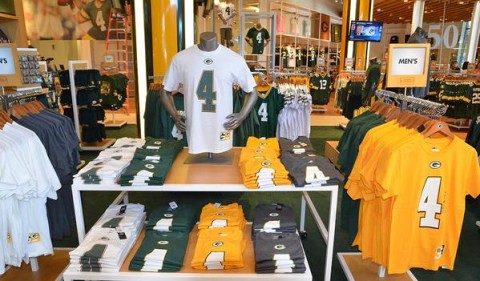 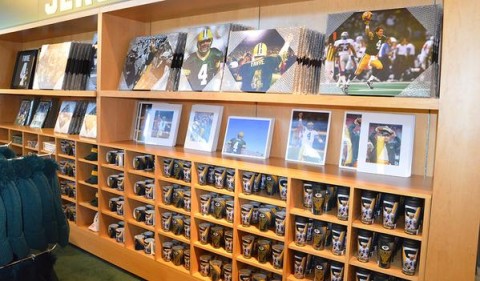 And saving the best — or rather, worst — for last. 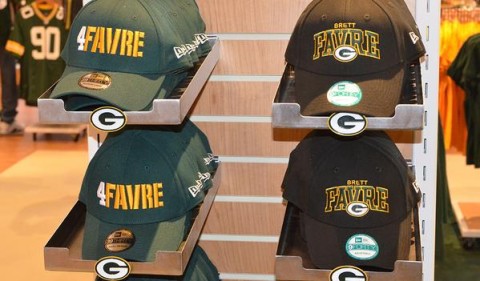 Who but Favre would wear a Brett Favre baseball cap? Note that the “Favre” caption are depicted larger than the Packers logo. Other caps have no relation to the Packers at all, other than having roughly equivalent green and gold colors.

Who would wear such ridiculous articles of clothing? Shameless Favre fans would, that’s who — you know the sort who, at times, claim to be Packers fans, but are really only Brett Favre fans, as evinced by their bragging of having both Jets and Vikings Favre jerseys. In other words, turncoats, cretins and traitors who should be deprived of their Green and Gold privileges altogether.

A fool and his money are soon parted. And I suppose fans such as myself and legions of other Packers fans and fans of other teams are really not all that different when we put down $200 or more for an authentic Aaron Rodgers, Eddie Lacy or Charles Woodson jersey. Still, there is something incredibly noble, a sense of honor in expressing devotion and loyalty to a team and its colors and symbols, to something greater than any one person that millions of comrades rally around and support with ardent devotion. When such zealotry is directed at a mere individual, however, particularly one as flawed, as selfish and egotistical as the ex-Packer one might call Berty Judas, aka Brettedict Favreold, aka Baron von Dongschotz, it is nothing more than shameless pandering to a false idol.

Admittedly, some, probably even most who buy this stuff are true Packers fans who never sided against the Packers, and simply wish to remember the good times before the betrayal. Many, however, were pulling for the Vikings against the Packers and against each and every one of us at one point in the not so distant past.