Murphy Not Real Happy About Those Arrests 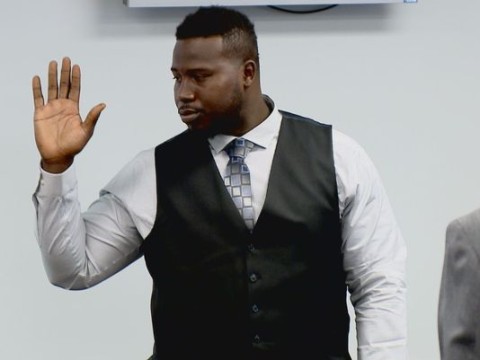 It is not lost on Green Bay Packers president Mark Murphy that his team has been doing their best Minnesota Vikings impersonation this offseason.

Three guys have had run-ins with the law since the season ended. They’ve all been pretty stupid, too.

Defensive end Datone Jones was sitting in his car, banging music and smoking weed. That led to a citation and a one-game suspension from the NFL. Defensive tackle Letroy Guion was pulled over with a giant bag of weed, almost $200,000 in cash and gun, which made him look like a drug dealer. That led to a fine and a three-game suspension from the league. Tight end Andrew Quarless had a verbal altercation with some women in a parking garage and decided he’d end that by firing off a gun he, for some reason, was just carrying around with him. His punishment is forthcoming.

That’s an eventful offseason for an organization that prides itself on employing “character” guys.

A little bit more eventful than Murphy would have liked.

“It’s obviously very disappointing,” Murphy said. “Ted (Thompson) and I, and everybody associated with the Packers, is disappointed. I think our fans are, but that being said there’s a process going forward with all those players. Some are still continuing. I guess others, there’s an appeal in place.”

And yet, despite all of the disappointment, all three of these guys are still employed by the team. In fact, Guion was re-signed after a settlement was reached in his case.

But that’s today’s NFL. In some cases, you can even beat your woman or your kids and still have a job.

So what’s a little weed or gun play, so long as no one gets hurt?

In fact, Murphy went a step further and defended Thompson’s record of bringing in “character” guys.

“I’ve been in meetings with Ted,” Murphy said. “Character is key for him. So I think as you step back and look over the long run, I think they’ve really done an outstanding job of bringing in quality people.”

We wouldn’t disagree, but let’s get down to brass tacks here.

The Packers are a Super Bowl contender. In fact, they’re the favorites according to a number of sources.

You don’t field a team like that every season and these are guys the Packers are counting on to help them win games. Things you might not tolerate if the team were rebuilding or destined for a 9-7 season and a Wild Card round exit, you’ll overlook during a season that could very well end in a championship.

Don’t fool yourself into thinking there’s anything else going on here.

There’s too much revenue at stake.

Couple of Idiots in Vikings Jerseys at Shareholder’s Meeting