Guy Who Took Brett Favre Photo Pretty Happy with Himself 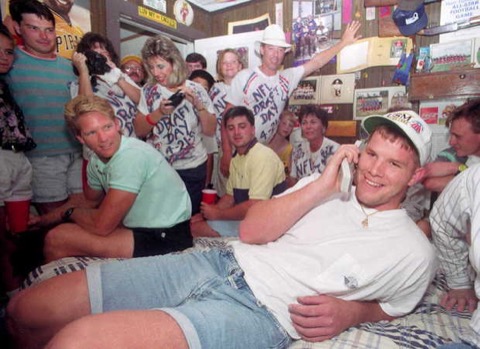 Yup. That photo right there. You’ve seen it before. That’s the youngster Brett Favre on draft day way back in 1991.

He’s on the phone with some hillbilly who worked for the Atlanta Falcons and he’s wearing one bomb-ass pair of shorts with t-shirt tidily tucked into them.

Denim. Rolled cuff. Above the knee. Tight as a motherfucker!

That photo was shot by Tim Isbell, a photographer for the Biloxi Sun Herald in Favre’s home state of Mississippi, and he is pretty happy with himself today. He calls the photograph iconic because it’s been pretty much everywhere.

And yeah, we guess, if that’s what you think constitutes iconic status. I mean, the photo has been everywhere because it’s fucking funny. Look at what that clown is wearing!

You should go here to read Isbell’s recollection of the day.

He adds a little to the story most of us are now familiar with. How Ron Wolf, then with the New York Jets, had Favre on the phone and wanted to draft him at No. 34. Then Atlanta called and told Favre they were choosing him at No. 33.