It could happen anywhere. At the grocery store, during a press conference, on the football field… these are the Minnesota Vikings we’re talking about.

Ignorance, idiocy and just being an all-around bag of shit in general is par for the course. Rumor has it, you MUST have those traits in order to be associated with the Minnesota Vikings organization.

Cornerback Josh Robinson had an ax to grind, you see.

He had an ax to grind because — HOLY FUCKING HELL! — gay people throughout the land were given the right to marry each other by the United States Supreme Court.

And clearly, WE’RE ALL DOOMED NOW!

Robinson wanted everyone to know this. Because, you know, he should obviously be the one who decides who can and cannot marry whom.

So he compared gay marriage to pedophilia because… DUH! 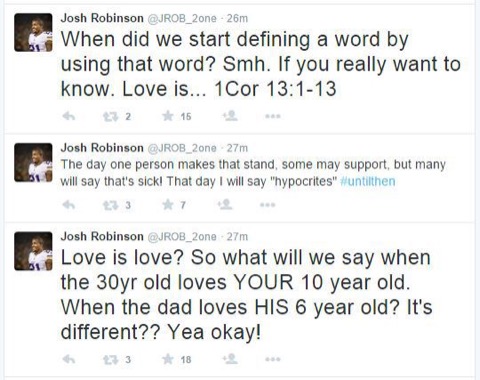 Your well-thought-out argument is both brilliant and well presented…

Now, this screen shot was taken around midday on Friday. If you look at Robinson’s Twitter account today, you won’t see anything.

His tweets are now protected.

So maybe even the Neanderthals in Minnesota wouldn’t let this bit of stupidity slide.

Clearly, there’s hope for us all. Except maybe Josh Robinson.

Oh, and by the way, you can still leave a message for Josh on his Facebook page if you are so inclined.