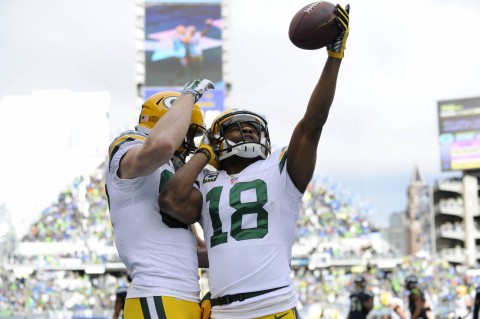 Randall Cobb was the Green Bay Packers big free agent signing this offseason and with that, come expectations.

He has to live up to his fat, new contract. He has to top his previous success. He has to lead the Packers to greater heights.

All of that is going to be tough for Cobb and he knows it, which is why he’s trying to keep expectations in check this offseason.

First, it’s going to be hard for Cobb to live up to his contract. At four years and $40 million, Cobb got No. 1 receiver money, when we all know he’s the No. 2 receiver in Green Bay. That deal actually pays Cobb $1 million more over the duration than the Packers’ No. 1 receiver, Jordy Nelson.

So Cobb would literally have to outperform Nelson to justify it and that probably isn’t going to happen.

Second, it’s also going to be difficult for Cobb to improve upon last season. He recorded a career-high 91 catches, 1,287 yards and 12 touchdowns in 2014. The Packers also only had two legitimate receivers in 2014. The play from No. 3 receiver Davante Adams was inconsistent to say the least and the tight end position was virtually nonexistent.

Adams’ second-year improvement alone will take some opportunities away from Cobb. If the Packers ever find a tight end who can produce, then there are even fewer balls to go around.

“It’s going to be hard,” Cobb said. “With Davante coming along, that adds a target, and he’s going to get more targets. He’s going to get more opportunities. Like I’ve always said, you have to make the most of the opportunities you do get. I look forward to this receiving corps. We have a great offense. We have a lot of weapons. Us spreading the ball out, it’s going to be hard to top what I did last year, but my mindset is always to score every time I touch the ball. I’m going to do the best I can every time I touch it.”

Taking the Packers to greater heights is the one area where Cobb can succeed.

He’s a dynamic weapon that most teams don’t know the luxury of. We’ve made the argument more than once that there’s no one beyond Aaron Rodgers who makes the Packers offense go quite like Cobb.

And who does Rodgers look for when he needs a big play?

That’s why the Packers paid Cobb all that money.

Not to be a No. 1 receiver. To be a guy who changes games.