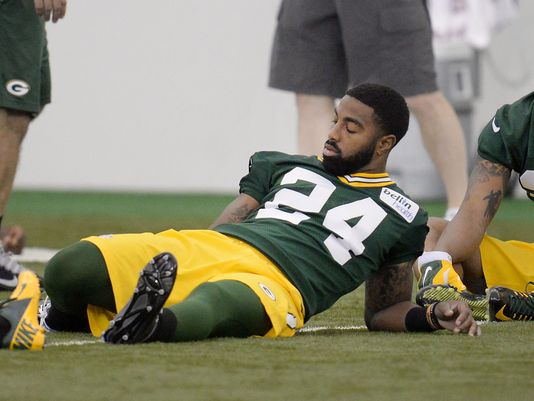 With OTAs finishing today, let’s take a rundown of what has been said, seen and/or reported about how the rookies on the team have looked so far.

Damarious Randall – 1st round pick in the draft

Randall was delayed in getting onto the field thanks to what was called a “minor ankle injury.” Since then, he has displayed the athleticism one would expect from a first round selection, and thanks to Casey Hayward sitting out, he has gotten time with the starting defense. Randall played safety in college and is obviously still getting the feel for what he is doing out there.

Quentin Rollins – 2nd round pick in the draft

Ask anyone who has observed OTAs to name the standout rookie and it is pretty much a consensus. The answer is Quentin Rollins. Considering Ted Thompson’s track record with 2nd round picks and the fact that Rollins actually played corner last season, it should not be a big surprise that he has the early lead on Randall. Observers have marveled at Rollins’ natural instincts for the ball and easy athleticism.

Montgomery has missed all three weeks of OTAs thanks to finishing his semester at Stanford, with graduation finally scheduled for this Sunday. I suppose graduating from Stanford is a pretty good excuse for missing team activities. Ty will be back for the mandatory minicamp, and all eyes will be on him then.

Ryan hasn’t done anything to embarrass himself. The linebackers are kind of a tough group to judge before the pads come on. He is admittedly still learning the playbook. Middle linebacker is a crowded position with Carl Bradford and Nate Palmer both being moved there from the outside, and Clay Matthews spending the majority of OTAs there. From what the coaches have said, Carl Bradford is very much in play on the inside, and it is not a given that Ryan will be a top back up there this season.

Hundley was understandably sharper from Day 1 than the undrafted quarterbacks that the Packers were used to bringing in. He is a smart guy who is quickly learning the system, and his athleticism should add interest to an otherwise dull preseason. That being said, Scott Tolzien has won as much praise during the OTAs as anyone, and Tolzien has the clear lead on the 2nd string quarterback position.

It is still hard to believe the Packers drafted a fullback in the sixth round. This is 2015, right? Talk about a position that is hard to judge before the pads come on. Ripkowski has the support of John Kuhn, and unless he gets injured or is an idiot, he should make the team on his name alone.

Another great name… Ringo is a Mike Daniels clone, and that is good thing. He plays on the defensive line, which means OTAs, like the bones, tell us nothing. Not exactly a deep position so Ringo should have a good chance of making the team unless Khyri Thornton discovers himself and Josh Boyd gets healthy.

Backman has flashed his speed and athleticism at times, reminding everyone of what we were hoping to get from Brandon Bostick. Still, Andrew Quarless has brought raves from Aaron Rodgers, and Richard Rodgers remains someone the Packers expect a lot from this season. That means Backman’s chances to contribute may be few and far between unless injury intervenes.

None of the undrafted rookies have earned themselves early raves though lineman Matt Rotheram, inside linebacker Tavarus Dantzler, and running back John Crockett are all expected to have a legitimate shot of making the final roster.