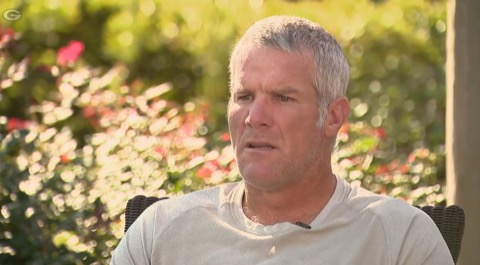 It is unclear whether this will be on local Wisconsin television, streamed from the Packers website, or both as the release states, “Details on when and how you can view the special will be released at a later time.”

The special will include perspectives from teammates and coaches. Of course, one wonders if that will include Mike McCarthy or even Aaron Rodgers, and if so, just how much they will hold their tongues. In addition, the program will also include an interview with the man himself. Quite tellingly, the ex-Packer stated, “Even I was shocked” at the news that the bowl at Lambeau Field sold out in a matter of hours for his induction ceremony.

Given that tickets were sold for a mere four dollars, why would he be shocked? Of course, the answer is obvious, no matter how much people dare not utter it.

As everyone knows, the man masterminded a scheme to be released from the Jets to play for the Packers most hated rival, the explicitly stated purpose of which was to wage an unholy vendetta against Mike McCarthy, Ted Thompson, and by extension, the Green Bay Packers and its legions of fans. His mission was to give the Vikings a Lombardi Trophy, a mission which, given how much of a choke artist Peyton Manning is, would have almost certainly succeeded, but for a mere technical 12-men-on-the-field penalty and subsequent interception in the NFC Championship game against the New Orleans Saints.

The chain reaction from ending the Vikings’ 50-year drought would have made the Packers 2010 Super Bowl championship impossible, and might well have led McCarthy and Thompson to be run out of town from the ensuing backlash. This, among a veritable laundry list of crimes and transgressions too numerous to recount here. In other words, he knows, deep down in his bones, that Packers fans probably ought not rush to pander to him.

The question of course is who are these fans who will be in attendance? How many of them were Vikings fans in 2009 and 2010? How many of these fans were turncoats donning enemy colors or, even worse, desecrating the sacred Green and Gold colors by mixing them with enemy markings? How many of these people are not Green Bay Packers fans at all, but rather, Favre fans?  One suspects that, much like the question of “how many licks does it take to get to the Tootsie Roll center of a Tootsie Pop?,” even Mr. Owl himself, the wisest one of all, can never answer this question.

Almost as vexing, one and all can rest assured that this “special,” whether it is actually aired on television or otherwise, will indulge in the very worst sort of whitewashing that would put any totalitarian propaganda to shame. Will the narrator even mention Favre’s career as a Viking or would the viewer, if left in a vacuum, be led to believe that the events from 2008 never even happened?

I highly doubt it.

As this author has conceded before, there are certainly reasons to go forward with this reconciliation of sorts, no matter how much certain persons on both sides have to hold their noses. Among them, the boatloads of cash the Packers organization stands to make by peddling schmaltzy Brett Favre merchandise.

But any reconciliation must be founded on a basis of truth and full disclosure. Pretending or acting as if this man’s betrayal never took place serves no one.

And while such blatant dishonesty and whitewashing should not fool even a three-year-old, it might just fool a few of those in our midst. Not all of them, of course, are Packers fans, but Favre fans and even former Vikings fans.

How many of these turncoats there are will never be known. If the truth could be known, it is probably higher than one would care to think.