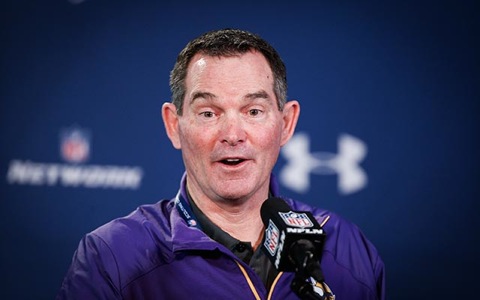 As is his team, he’s fucking irrelevant.

Zimmer only gets our attention when he does or says something stupid. Surprisingly, since it is the Minnesota Vikings way, that has happened fairly infrequently. It happened today, though.

Zimmer was on some local, homer radio show and unprompted, he went into a diatribe about teams giving their guys the day off during minicamp for team-building exercises. Certainly not coincidentally, Packers coach Mike McCarthy gave his team the day off on Wednesday for just such an activity.

“We don’t get better at team building by playing ping-pong. We’re going to team build by winning on the football field,” Zimmer said.

He then carried on about how the Vikings are in minicamp to work, how they have a young team and how those youngsters need to be practicing.

The Green Bay Packers have done this for at least three years prior to this one. In those years, they’ve gone 12-4, 8-7-1 and 11-5. Each year they’ve made the playoffs and each year they’ve won the NFC North.

So clearly, taking a day off of work during minicamp hasn’t hurt them.

Oh, but the younger players need the work!

Finally, this bears mentioning. Back in 2012, another shitbag who coached an NFC North foe — uber-douche Jim Schwartz, then coach of the Detroit Lions — felt the need to take a swipe at the Packers for team building.

“We had no sporting clays today or no amusement parks or water [parks]. [It was a] work day of minicamp,” Schwartz said after he found out the Packers took a day off to shoot skeet.

He’s not coaching in the NFL, Mike.