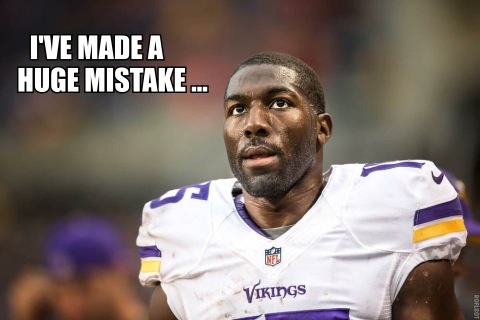 Greg Jennings’ departure from the Green Bay Packers was not pretty, but he now openly admits he was selfish because he felt hurt.

After Jennings signed with the Minnesota Vikings back in 2013, he constantly threw shade at the Packers and quarterback Aaron Rodgers. The highlight of that nonsense may be when he said the Packers brainwashed their players. Although it was pretty much non-stop diarrhea of the mouth from Jennings that entire summer…

The receiver, who was cut by the Vikings during the offseason and is now a Miami Dolphin, was hosting a golf tournament in Minnesota this week. It was noted that Jennings wasn’t nearly as salty leaving the Vikings as he was when he left the Packers.

That’s when Jennings brought up the fact that he was butt hurt.

“It just was really something I was dealing with myself. I had to recognize that I had a level of pride to where I felt like, ‘Wow, I went through all of this.’ It was almost a sense of entitlement, like, ‘Wow, I dedicated my entire career, and [there’s] no fight, no want [by the Packers to keep me]? It’s almost like you disowned your child. But that’s what I was feeling — and again, selfishly. Bottom line, I was hurt, because I did want to stay. But I wasn’t willingly embracing change at that moment. It’s unfortunate, but I’ve been very apologetic to them personally. I don’t have a lot of things where I wish it wouldn’t have happened. I definitely wish I would have handled that better.”

Few exits from Green Bay come to mind as being as graceless as Jennings’, at least in recent years. Brett Favre, Javon Walker, Mike McKenzie and that’s probably about it.

The difference with those guys is they didn’t go on bad-mouthing the organization after they were gone. Of course, they also demanded to play elsewhere.

Jennings wanted to come back and was met with deafening silence.

That doesn’t make his bullshit any less palatable, though.

At least he knows it.