Did You Catch the Green Bay Packers on Ballers?

If you don’t know what it’s about, it’s about football, but the off-the-field stuff.

Whether it’s any good is still debatable. We’ve seen some unfavorable comparisons to Entourage and thus far, wouldn’t disagree.

Now, the show has gotten some attention because it uses real NFL teams. The Rock’s character played for the Miami Dolphins and there’s a scene in the pilot that shows him in the Dolphins uniform. He lays out some guy in a Buffalo Bills uniform.

Somehow, HBO has been able to get away with using team logos without the teams’ or NFL’s permission. Supposedly, this can be done so long as the trademarks are used in their intended way and not altered. However, the league and teams have certainly threatened lawsuits over such usage in the past. In fact, the league once threatened to sue us because we had an image of some Packers in uniform (just the bottom half) in our site’s header.

Not knowing any better, we removed it.

Of course, we’re not HBO and we’re not producing a show with the NFL (Hard Knocks). We don’t have the same kind deep pockets or leverage.

But to get to the point, there was a scene in the pilot with the Green Bay Packers.

One of the show’s other central characters is receiver Ricky Jerret.

In the pilot, he plays for the Packers.

Then he gets in a fight in a club after boning some chick in the bathroom, it turns into a PR disaster and the Packers cut him.

In the scene in question, Jerret calls what is presumably supposed to be the owner of the team (obviously, totally inaccurate) and apologizes for his behavior. The owner is sitting at a boardroom table with a number of other football people. The first thing you see in the boardroom is the banner on the wall that says 13-time world champions and then there’s a photo of Jim Taylor running the ball. 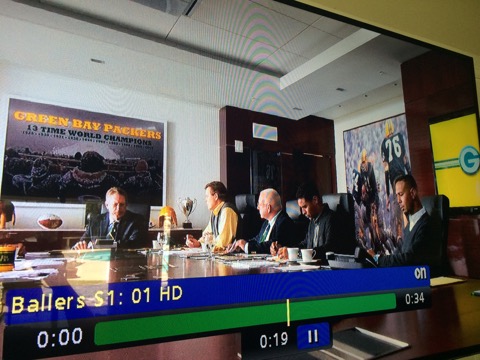 Knowing how uptight some of people in the Packers real organization are, we have to imagine they probably shit themselves when they saw this (providing they made it past the earlier scenes with — gasp! — exposed breasts and simulated sex).

Of course, the fictional Packers owner tells his guys to cut Jerret as soon as he hangs up the phone.

Can’t be having a ne’er do well like that on the Packers! Unless his name is Letroy!

Previous Article
Scenes From Kenny Chesney and Jason Aldean at Lambeau
Next Article
Casey Hayward Wants to Be No. 1