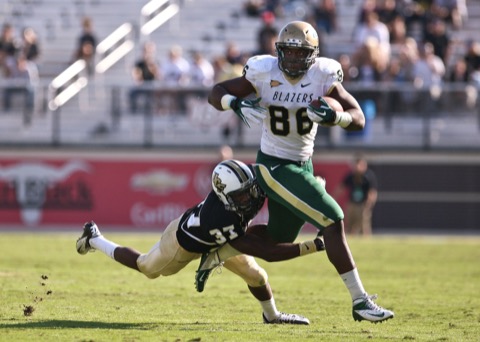 The Packers needed some depth at the tight end position after releasing Brandon Bostick and they may have gotten it with Backman.

Interestingly, Backman was projected to go undrafted, but this isn’t the first time Ted Thompson has drafted someone higher than everyone else felt he should have.

It’s pretty obvious why Backman was likely going to go undrafted until the Packers showed up — there is nothing about him that’s outstanding.

His stats are pretty underwhelming as well. Backman caught 39 passes for 399 yards and three touchdowns as a senior. His four-year totals at UAB are 96 catches for 979 yards and nine touchdowns.

And this is from a guy whose primary job was to catch the ball.

Frankly, based on what we’ve gathered thus far, we’d be surprised if he even makes the Packers roster.

Lacks the prototypical measurements teams want from a move tight end and he’s simply not an effective enough blocker to be considered as anything more than an H-­back.

You know this guy has a highlight video, though!