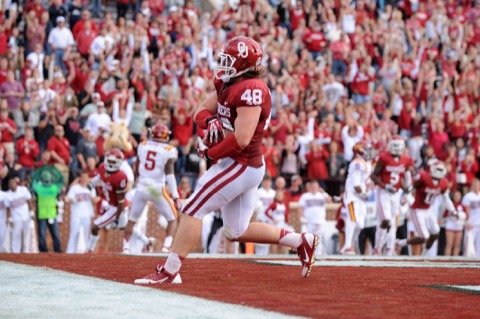 In the sixth round of the NFL Draft, the Green Bay Packers selected Oklahoma fullback Aaron Ripkowski.

You know, the fill their pressing need for multiple fullbacks.

Seriously, we knew the Packers were interested in Ripkowski because they had him in for a pre-draft visit. He was considered by a lot of people to be the top fullback in the draft, although he wasn’t the first one selected. That guy was Alabama’s Jalston Fowler, who went to Tennessee in round four. Rutgers’ Michael Burton also went ahead of Ripkowski — to Detroit in round five.

At any rate, the Packers likely have their current or future replacement for John Kuhn.

We say current, because why would any NFL team keep two fullbacks on their roster? Of course, we should point out that the Packers actually kept three fullbacks for multiple years. They just like to defy logic like that.

At any rate, Ripkowski is 6-1, 257 and he certainly isn’t going to wow you with his stats.

He had just six carries for 13 yards and three touchdowns in 2014. He added seven receptions for 38 yards and another touchdown.

Ripkowski can hit some fools though. That’s obviously why he’s in Green Bay.

That, and we have to think, his name. Aaron Ripkowski was born to play fullback for the Green Bay Packers. So now you’ll be able to chant “Riiiiiiiiiiiiiiiiiiiip!” after the Packers release “Kuuuuuuuuuuuhn!”

That’s what’s really important here. That the Packers have a big, white fullback whose name you can yell twice per game.

Old-school blocking back who will have a hit or two each game that wows the crowd and gets his teammates fired up. He often charges in head-first and with a lowered head, so his success rate can vary greatly from game to game. Lack of pass-catching background hurts his chances.

Here’s a video of probably every play Ripkowski ever made at Oklahoma.