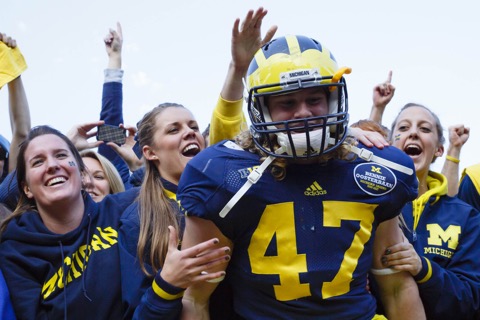 In the fourth round of the NFL Draft, the Green Bay Packers went back to the defensive side of the ball, drafting Michigan linebacker Jake Ryan.

This is literally the first pick in this draft that the Packers have made that makes total sense.

Ryan had 112 tackles, including 14 for loss and two sacks in 2014. He also had an interception and two forced fumbles.

This certainly appears to be a high value pick for the Packers and it gives them additional depth — something they sorely needed — at inside linebacker. We certainly don’t expect Ryan to come in and start as a rookie, but he as the potential to do so in a year or so.

He’s got the size, physicality and commitment to film work to play inside, but his instincts still need work. Ryan is a little stiff and stays blocked for too long, but his disengagement from blocks will improve with more reps inside. Faster than quick, he is scheme versatile and can fit inside or at the SAM linebacker spot in a 4-3. Ryan’s productivity comes from toughness, play demeanor and physical tools. Teams could pigeonhole him as a “try-hard” linebacker, but they shouldn’t.

Also food for thought — the last time the Packers drafted a linebacker from Michigan, it was John Anderson. He was one of the best to ever play the middle for Green Bay.