Returner Job Appears to be Ty Montgomery’s to Lose 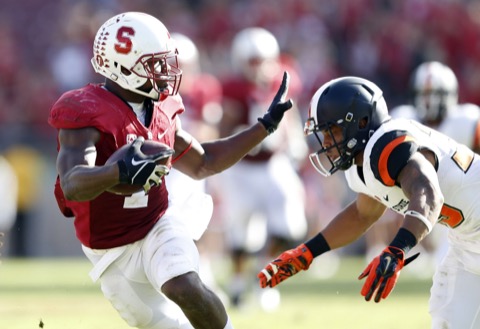 When the Green Bay Packers drafted Stanford receiver Ty Montgomery in the third round, there was some head scratching.

The Packers certainly have plenty of receivers on hand, including two Pro Bowlers and three other guys they drafted just last year. Then you look at Montgomery’s resume and it becomes evident. The Packers drafted him for his return ability.

And that’s likely the primary reason they drafted him.

Those are impressive numbers.

What isn’t impressive is how bad the Packers were on kick returns last season. They tried to force running back DuJuan Harris into the role and he was an unmitigated disaster, eventually being replaced by Randall Cobb late in the season. The Packers were good on punt returns, primarily because of Micah Hyde, but they were also exposing two key contributors in Hyde and Cobb, who split those duties.

So now they have the luxury item in Ty Montgomery. The guy who’s just here to return kicks and maybe punts.

“He’s a powerful young man, especially for a receiver,” McCarthy said. “He doesn’t go down very easily. With that, being built a lot like a running back, I think that’s what I personally favor in the return game. So I think he’s a heck of a young player, and I think we were fortunate to get him in the third round.”

“We will be better on kickoff return,” McCarthy said. “And Ty will definitely have the opportunity to help us improve.”

So there’s your kick returner. The only question, in our eyes, is if Montgomery gets the punt return job too.

Hyde has averaged 13.6 per punt return in his two NFL seasons. More importantly, he has three touchdowns, so he’s clearly a threat to house one at any given moment.

The smart money says Hyde’s role on defense will contribute to determining his role on returns. We’re going to assume he’ll be given an opportunity to start at cornerback opposite Sam Shields. We’d be surprised if he doesn’t end up, at the very least, as the Packers nickel back.

If that is indeed the case, then why risk him as a punt returner when you’ve got Montgomery?

Jordy Nelson Has a Commercial About Shaving His Head

Jordy Nelson Has a Commercial About Shaving His Head