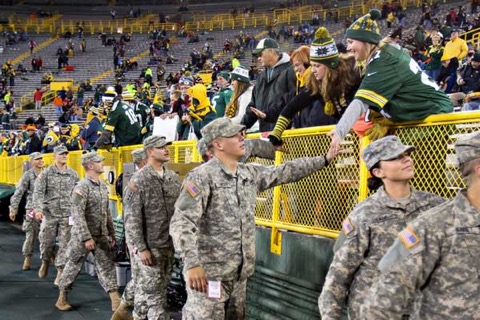 Personally, I find this a bit outrageous. The fact that NFL teams are taking sponsorship dollars from the U.S. military and then putting on various fake “Hometown Heroes” acknowledgements.

It’s outrageous because people assume teams are orchestrating these ceremonies or acknowledgments out of goodness or civic duty.

“This person went and got shot at in some shithole half a world away, let’s acknowledge that sacrifice…”

No one actually said that.

Second, it’s outrageous because teams are taking taxpayer money. Your money. My money.

And we get it. No one really wants to join the armed forces anymore. They have to advertise and the NFL provides a captive audience.

But do they have to advertise in such a deceptive way that we all think we’re saluting our local military personnel when in fact, we are watching a recruiting promo?

And do NFL teams like the Green Bay Packers have to play a part in the charade AND indirectly suck more money out of our pockets?

That’s right, the Packers are all over this taxpayer cash.

The department of defense handed NFL teams $5.4 million of their advertising budget from 2011-14. The Packers took in $600,000 of that, which is less than only four other teams.

So you could salute your Hometown Heroes…

And they could line their pockets.

Now, we won’t pretend the Packers don’t do any good for the community or even the military. They do and they were quick to point those things out in the wake of this report.

However, that doesn’t make this particular transaction anymore seemly.