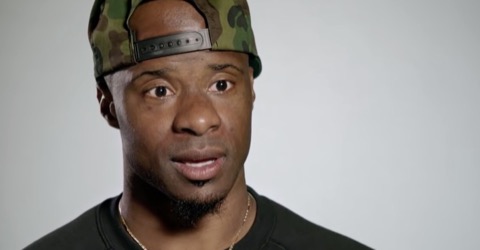 Taylor was, for 12 seasons, a cornerback for the Pittsburgh Steelers. He just retired last month.

Now, I’m not going to miss Taylor for anything he did on the field. I could care less about Pittsburgh’s inferior brand of football. But off the field, Ike Taylor was a gem.

If there was a more country motherfucker playing in the league, I don’t know who it was.

Taylor will periodically appear in NFL Films pieces. I was first introduced to the genius of Ike in the NFL Films’ doc on the Green Bay Packers Super Bowl XLV win over the Steelers. Listening to the guy, you just can’t help but chuckle.

Not only is he humorous, but he sounds like they pulled him off the farm just yesterday. You can’t help but conclude that he probably still calls his mother “mammy.” And then there’s the fact that you can’t quite tell if he’s aware that he’s being funny or it’s totally unintentional.

So, NFL Network is in the process of unveiling their top 100 players of 2015, as voted on by other players.

Randall Cobb was No. 100 and who did they call on to talk about Randy? My main man, Ike Taylor!

Ike starts off by discussing how Cobb can line up all over the field and then takes an unexpected left turn to note what beautiful eyes Cobb has.

“Boy, you know you cute. Huh? For guy, man, you supposed to be handsome. But you tell a guy he cute, man, something ain’t right!”

Ah, Ike, you sweet son of a bitch!