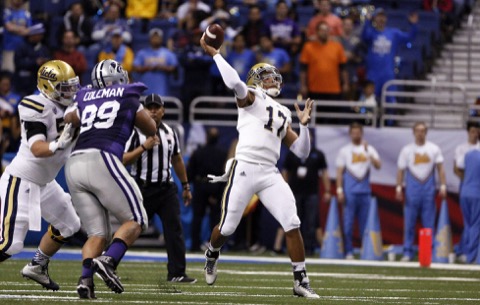 We know how quarterback Brett Hundley fits in with the Green Bay Packers in a practical sense.

However, one of things we discussed after the draft is how he feels about that.

Here’s a kid who a majority of scouts had as the third-ranked quarterback in the draft. Hundley himself had dreams of going in the first round. And then he falls to the fifth round, where he is the sixth quarterback drafted and ends up going to a team where he has no chance to start. This, after leaving school a year early.

Not exactly how you dream it up.

Well, we can tell you Hundley isn’t happy about his draft slide.

Seriously, we were more curious about whether Hundley would fit it. As in, will he be a good soldier and accept his role? One that could realistically see him as the Packers third quarterback this season, behind the more experienced Scott Tolzien?

“I think Green Bay is the perfect organization to learn as much as possible, and they have the best coaches to help me do that,” Hundley said. “And Aaron Rodgers.”

Those are the two themes that Hundley repeated in interviews.

He wants to learn as much as possible and he’s been very complimentary of Rodgers.

The question now becomes, can the Packers develop Hundley into a top-tier backup? The kid certainly has plenty of athletic ability and a good arm, but he needs to work on his accuracy, pocket presence and decision-making.

Some people have already labeled Hundley as the heir apparent to Rodgers. That’s a pretty naive statement, considering Rodgers wants to play nine more years. So that’s what we’re looking at. Can Hundley be that guy who comes off the bench and wins games if Rodgers goes down?

Certainly, we feel better about that prospect with Hundley than we did with, say, Graham Harrell. Realistically, he’ll have a year behind Tolzien before he’s even given that chance though.