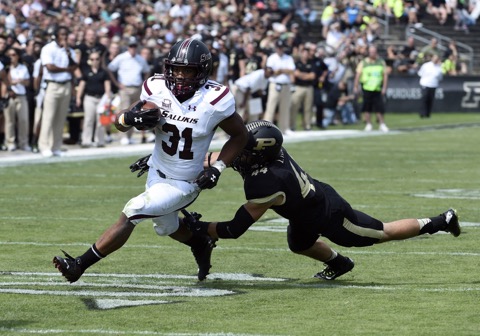 For most teams, signing undrafted free agents is a formality tolerated in order to get some extra bodies for camp. For the Green Bay Packers, it’s a big deal, since two or three of these guys always seem to make the final roster.

You can bet that fact isn’t lost on the guys who have agreed to join the Packers, either. Despite having one of the best teams in the league year in and year out, which should make it hard to make the final roster, undrafted guys know they’re going to get a chance to do just that in Green Bay. Therefore, the Packers often get the cream of the undrafted crop.

Here’s this year’s class and what we know about them.

Guard Matt Rotheram, Pittsburgh
We know this about Rotheram. He was in demand after the draft ended, getting offers from 15 teams, some more lucrative than what the Packers offered. Rotheram said he felt confident he could make the roster in Green Bay and thus took less money for the shot to do so. Rotheram is 6-5, 325 and started 27 games for Pitt at right guard. He also started a number of games at right tackle. You know what the buzz word is when it comes to offensive linemen — especially undrafted ones — in Green Bay. That’s right. Versatility.

Receiver Adrian Coxson, Stony Brook
The Packers had Coxson in for a pre-draft visit, so it’s not surprising they signed him. He started his college career at Florida and then transferred to Maryland before ending up at Stony Brook. In 2014, he recorded 43 catches for 664 yards and six touchdowns. While that’s not all that impressive, this is. Coxson ran a 4.3 40. If this guy can catch the ball, look the hell out.

Outside linebacker Tavarus Dantzler, Bethune-Cookman
We can’t say we know much about Dantzler. He’s 6-3, 225, which makes him built more like a safety than a linebacker. He had 80 tackles, including 8.5 for loss and a sack in 2014. Dantzler was not invited to the combine and instead worked out for teams at a regional combine. He did have a pre-draft visit with the Packers.

Tackle Fabbians Ebbele, Arizona
Ebbele is 6-8, 315 and that’s what he has going for him. The reason he wasn’t drafted, despite those measurables, is because he has poor technique and plays too upright. Go ahead and insert joke about pad level here. If the Packers can correct Ebbele’s issues, then they potentially have a mauler.

Cornerback Bernard Blake, Colorado State
Blake joins what is once again a very crowded cornerback group in Green Bay. Blake is 6-0, 185. Judging by his statistics, Blake’s play has gone downhill over the past two years. As a junior, he had 64 tackles, one interception and 12 passes defended. As a senior, he had 38, one and 11. He was not a full-time starter at CSU. Is considered a good cover guy, but not physical enough.

Receiver Larry Pinkard, Old Dominion
Well, here’s an intriguing prospect. Pinkard got booted from the ODU team in July of 2014 for a team rules violation. As a junior, he had 68 catches for 1,020 yards and nine touchdowns. Had he played his senior season, you have to think Pinkard would have improved on those numbers and probably would have been drafted. The Packers have plenty of receivers, but here’s a guy we’ll be keeping an eye on nonetheless.

Tight end Mitchell Henry, Western Kentucky
Henry actually has better stats than the tight end the Packers drafted in the sixth round. As a senior, he had 32 catches for 489 yards and four touchdowns. He’s 6-4, 245 and that’s about all we know.

Running back Malcolm Agnew, Southern Illinois
Meet your new DuJuan Harris. Like Harris, Agnew is pretty much a bowling ball at 5-9, 207. He started his college career at Oregon State before transferring to Southern Illinois. His senior season, which was off to a very promising start, was cut short by an ankle injury after eight games. In those eight games, he put up 820 rushing yards, 192 receiving yards and 12 touchdowns. Agnew is quick and known as an inside the tackles runner. It certainly appears Agnew had the talent to be drafted, so here’s another guy worth keeping an eye on.

Receiver Ricky Collins, Texas A&M Commerce
Collins is one of the receivers the Packers had in pre-draft. Although he caught 71 passes for 1,187 yards and 14 touchdowns in 2014, he’s considered an unknown. Collins played two season of junior college ball before transferring to Midwestern State in 2012. He caught just seven passes in five games there. Then he sat out all of 2013 before playing 2014 at Commerce. Really, all anyone knows about Collins is that he was able to tear up Division II competition for one season.

Defensive tackle Lavon Hooks, Mississippi
Hooks was a JUCO transfer and never a full-time starter for Ole Miss. In two seasons, he totaled 27 tackles, including nine for loss and three sacks. Of course, he’s 6-3, 318 and you can’t teach that.

Guard Marcus Reed, Fayetteville State
Let’s go ahead and just say this guy is probably as raw as they come. He played two years of junior college ball before transferring to Fayetteville State, which is a Division II school. Reed started every game of the 2014 season at either guard or tackle. Here are the important numbers — 6-5, 350. The guy is a monster.

Running back Alonzo Harris, Louisiana-Lafayette
Well, somebody on the Packers was down there in Lafayette scouting the hell out of the Rajin’ Cajuns. That’s for sure. They also drafted ULL defensive end Christian Ringo in the sixth round. As a senior, Harris had 807 yards and 12 touchdowns, while averaging 4.7 per carry.

Running back Raymond Maples, Army
It’s hard to know what to make of Maples. He played five years of college ball after being granted a medical redshirt season following the 2013 campaign, which was cut short after just three games. Maples had two 1,000-yard seasons (2011 and 2012), but then was more or less an afterthought when he returned in 2014. Despite playing in 11 games, Maples carried only 44 times for 266 yards and three touchdowns.

Receiver Javess Blue, Kentucky
In 2014, Blue had 29 catches for 529 yards and five touchdowns. Those aren’t mind-blowing stats, but Blue did average more than 18 per reception. He also did this.

Receiver Jimmie Hunt, Missouri
Just can’t get enough receivers, can we? In 2014, Hunt caught 40 balls for 698 yards and seven touchdowns while battling knee and shoulder injuries. He ended up having shoulder surgery in December and missed the Tigers’ bowl game. Hunt’s most impressive game came against Alabama in the SEC Championship, when he caught six balls for 169 yards.

Outside linebacker James Vaughters, Stanford
The vibe we’re picking up on Vaughters is that he’s big and strong and a solid locker room guy, but lacks any semblance of athleticism. He’s been labeled stiff. As a senior, Vaughters had 51 tackles, including 11 for loss and 6.5 sacks. He also had two forced fumbles.

Cornerback Ladarius Gunter, Miami
Hey, here’s that tall cornerback you wanted! Gunter is 6-2, 200 and was projected to go as high as the fourth round of the draft. Obviously, he has good size. The knock is that he doesn’t have great speed and there are questions about this ability in man coverage. It’s going to be tough for an undrafted corner to make the Packers this year, but Gunter would be the guy to keep an eye on if you’re a betting man.